"At the end of the day, I want to know that I’ve done something to make this city a better place to live. Birmingham has so much to offer. We keep growing and getting better. It’s a city where we suffer the sins of our fathers, but we can keep working to change peoples’ attitudes and outlooks. You can’t change everyone, but if you can change one person you’ve done something worthwhile."

From an unassuming studio across from Regions Field, Scott Register is hoping to change your mind. The seasoned DJ, Birmingham Mountain Radio host, and A&R agent is a voice for artists, independent music retailers, and Birmingham’s entertainment industry. For over two decades, listeners have tuned in to hear “Reg” play and discuss new music, host live shows, and interview some of the most notable musicians and songwriters of a generation. As we wait for concerts to return and watch beloved venues struggle during a pandemic, Scott and the team at BMR continue to wake our city up each weekday morning and engage our community with the best of local music and more. 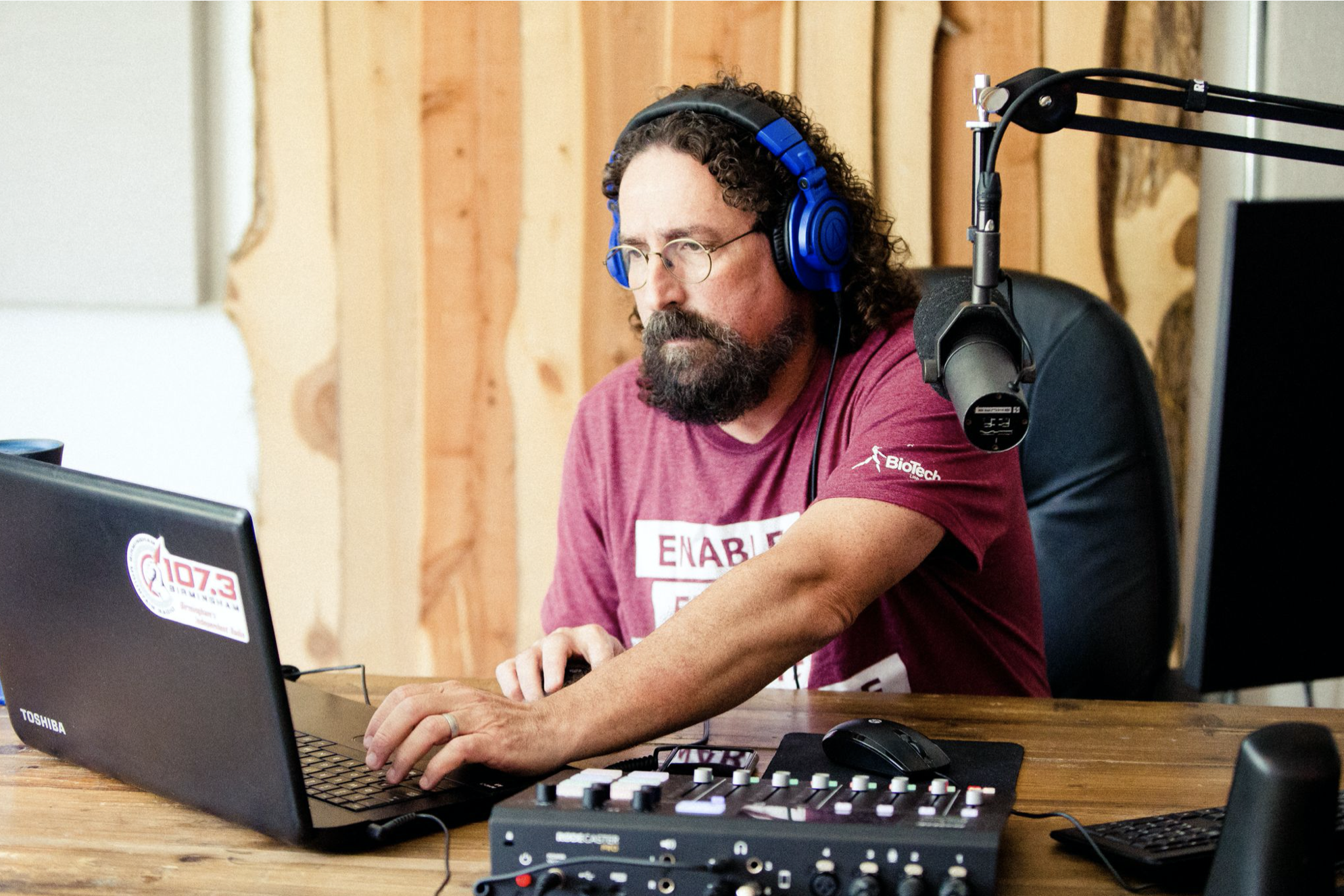 You’ve been a fixture in the Birmingham music scene since the mid-nineties. How did you get your start in radio?

It was a complete “right place, right time” thing. After college, I went to work for a small advertising agency that marketed City Stages. Since I was doing radio promotions, I got to know a bunch of folks in radio. I met Dave Rossi, who was involved in the beginning stages of a station called “The X.” We had a lot of musical loves in common, and he asked me if I wanted to do a show on Sundays. I started with a one hour show. One hour turned into two, and two turned into four. I thought it would last maybe six months. Here I am twenty-three years later.

Reg’s Coffee House is still on every Sunday from 10 am – 2 pm. Somewhere along the line, I screwed up and got a morning show Monday through Friday. I’m a night owl with a morning show, and that might lead to an early death, but I do love it.

Your morning show on Birmingham Mountain Radio didn’t start out as a talk show, but it has evolved into an entertaining and informative platform for what’s happening in music and current events. You were trepidatious about that concept at first, but how do you feel about it now? What do you hope you accomplish with this platform?

Will Lochamy approached me about the concept. He and his brother Reed had their own program and their own chemistry with each other. I told him he could stop by on a couple of mornings, and we could see how it went. After that first time he was in the studio, it just felt right. It’s definitely something that you don’t get anywhere else in this city, and I think it’s because we both really love our community. In each of our careers, Will and I have had so many opportunities to get out of this town, but the bottom line is that we don’t want to. It’s home, it’s where we raise our kids, and we love it.

At the end of the day, I want to know that I’ve done something to make this city a better place to live. Birmingham has so much to offer. We keep growing and getting better. It’s a city where we suffer the sins of our fathers, but we can keep working to change peoples’ attitudes and outlooks. You can’t change everyone, but if you can change one person you’ve done something worthwhile. 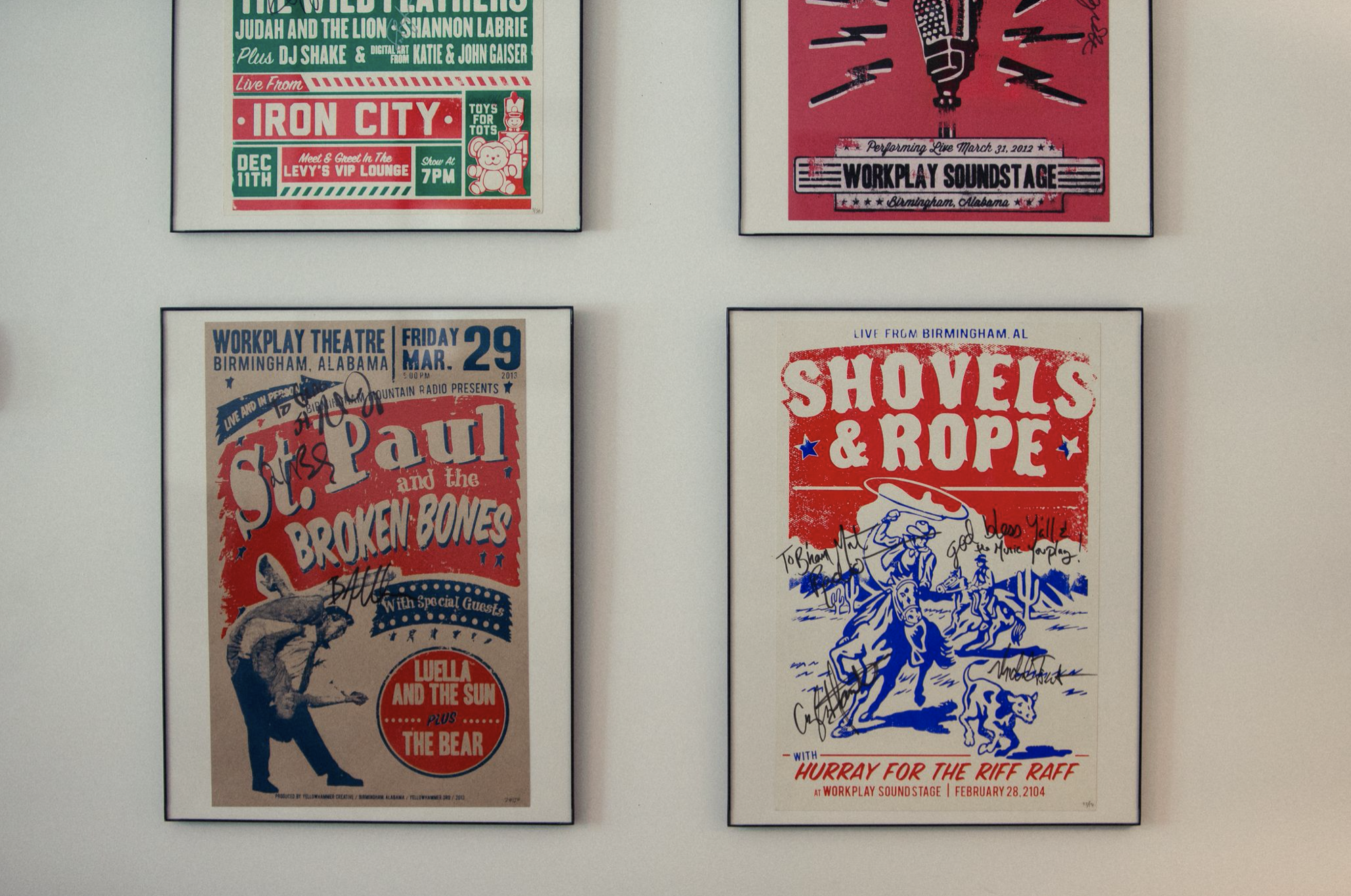 You have a journalism background, and a big part of your work is interviewing musicians — not just playing their music on air. What are some of your most memorable interviews?

Over the years, I’ve interviewed so many people, and a lot of them, at the time of the interview, weren’t always widely known yet. One that sticks out in my mind was with Shelby Lynne. It was the first interview I was really nervous about. She had a reputation for being surly, and I thought she was going to eat me alive. I’d worked all week preparing questions and had a whole legal pad full of what I thought I should ask her. Her band was murderers’ row of some of the best musicians out of Nashville — not just hired hands backing her up; I knew them all by name.

Right before the interview, she stormed in wearing an Adidas tracksuit, holding a chihuahua, and yelling, “I’ll fire you. I’ll fire every last one of you!” I thought, “Oh god. I’m dead.” She looked at me, and I looked at my legal pad of questions. I crumpled up the paper and threw it in the garbage. I was honest with her and told her I’d never been so nervous about an interview. She thought it was funny and we talked for an hour. She ended up playing twice as many songs as we’d planned for, and her tour manager even asked me to join them on the road. That was when I knew I’d done my job. I got the curtain to come down, and she opened up about changing her career path and direction with the album I am Shelby Lynne. We had a great time, and every time I’ve seen her since, she has been just so wonderful.

I’ll never forget interviewing John Mayer. At the time, no one really knew who he was, but I felt like he was just this phenomenal guitar player. The station phone started lighting up immediately. That was one of those moments that yielded a great interview with no expectations set beforehand. I still look back, years later, and think, “I never saw that one coming.” 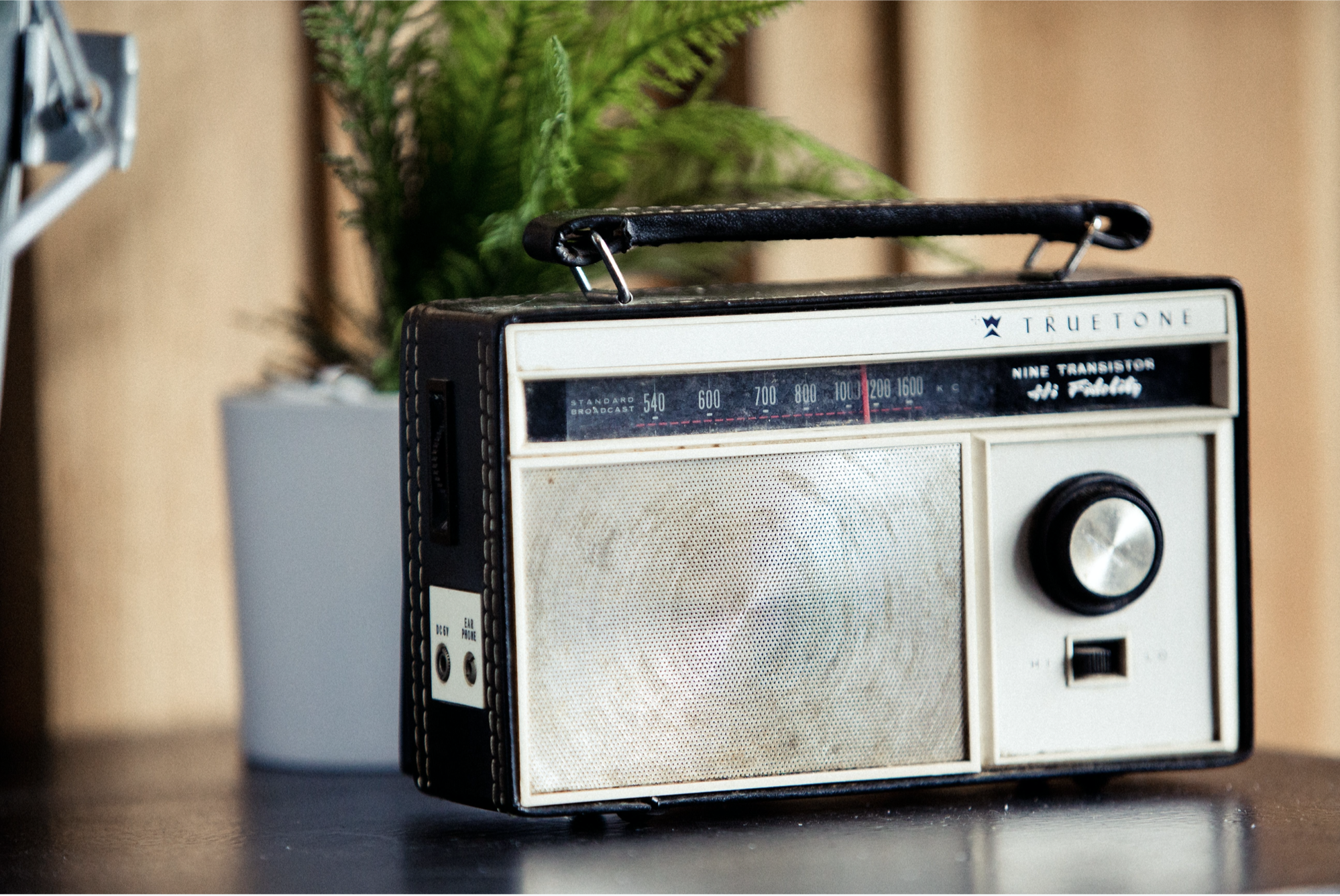 Which was your first passion — music or journalism? How did that passion develop?

Music has been my passion since I was about six years old. Some of my earliest memories are about specific albums and hanging out listening to music with my mother in her green Karmann Ghia. I went to my first concert at age nine — Alice Cooper and ACDC, with Bon Scott, at the BJCC in 1978. I’m pretty sure that’s what started this whole mess!

I was the kid in high school who made mix tapes for everybody. I didn’t realize then that I was being a tastemaker; I just wanted to make my friends happy. I also realized that some of the bands I liked weren’t getting heard by a lot of people, and I wanted to turn others onto what I was into. I loved creating those tapes; it was like my homework. I could come home from school and do math or I could roll tapes. There wasn’t any question which I was more interested in, and I have old friends who still listen to those tapes!

Over the course of your career, you’ve watched a lot of local talent achieve national success. What hometown artists and musical experiences left an impression on you? What is special about Birmingham’s sound?

Before I was old enough to get into clubs, I used to sneak into Grundy’s to watch Eric Essix play. I was a teenager and not particularly into jazz, but I just loved his sound. My uncle was in a bunch of bands too back in the day — Cozy and others. I’d sneak into clubs on Morris Avenue, and I never got tired of it. I always loved listening.

There’s a lot of talent in this town, and there always has been. BMR does a great job of playing great artists on Local Mash, our locals only show. Right now, there are probably a dozen or so local artists in rotation with current songs, and that’s not something you get from a lot of radio stations. I think we do a good job of fostering the Birmingham scene. Of course, I want the next big artist to be someone from here. It gives us one more thing to beat our chests about.

We put this station on about ten years ago — right when people were really starting to tune into artists from this area. Everyone’s always looking for the next big thing, but a lot of what I like right now sounds like the music out of Muscle Shoals that I liked when I was growing up. What goes around comes around. It’s the right kids finding each other, that chemistry of great lyrics and musicianship, and a little bit of magic. 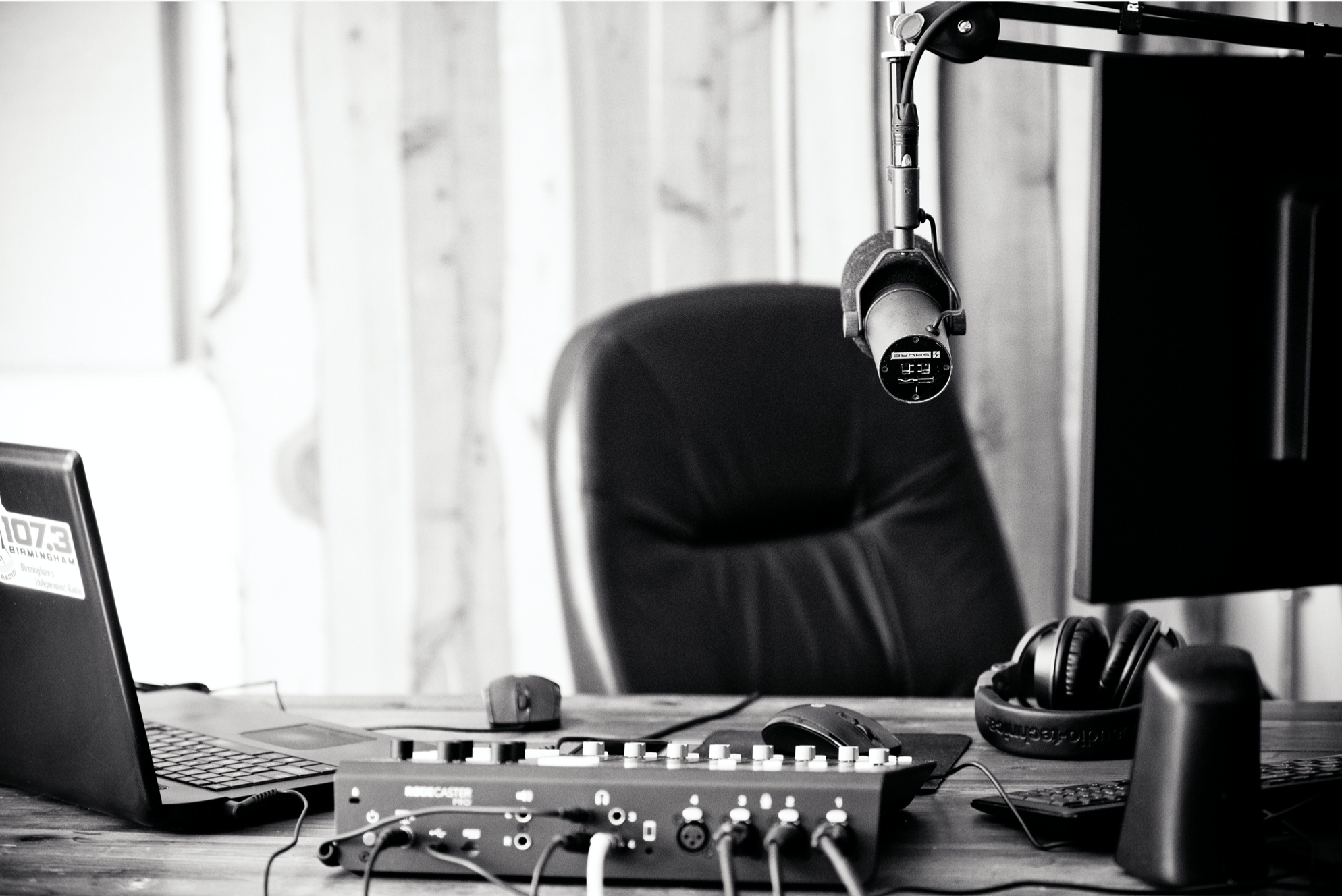 Community is all about investing in each other — especially the creative community. Right now, with venues shut down and the entertainment industry hurting, how can we continue to invest in our musicians and the satellite businesses affected?

Stay tuned in, and learn about legislation that will help support artists. Plug in and help out in the small ways you can. If you can send twenty bucks to WBHM’s fundraising campaign, do it. Buy your next album from a local shop or directly from the artist off their website. Pick up a burger from a venue that can’t have shows but is still serving food. Just do the little things you can. It might not feel like it amounts to much, but it helps a little. And, most of all, it gives people hope. That’s what we all need the most.