"Jazz is democratic because everyone has a chance to add their own voice to the music. I want to keep passing that on. It's the only original art form created in this country and now it’s celebrated in so many countries around the world. If it’s not passed down it may disappear."
Interview: Meghann Bridgeman
Photos: Ambre Amari
Dr. Leah Tucker has been the Executive Director of the Alabama Jazz Hall of Fame since 2004. She has kept up the momentum, enabling the organization, based in a historic site at the center of the Birmingham Civil Rights District, to serve as a cultural touchstone, originating and sustaining many musically invaluable programs.

Dr. Leah Carver, how wonderful to be here with you in the newly revitalized Carver Theatre! The renovation experience is as good a place as any to begin our conversation.

What was the theatre renovation timeline? And tell us a little bit about the experience of watching the theatre come back to life. 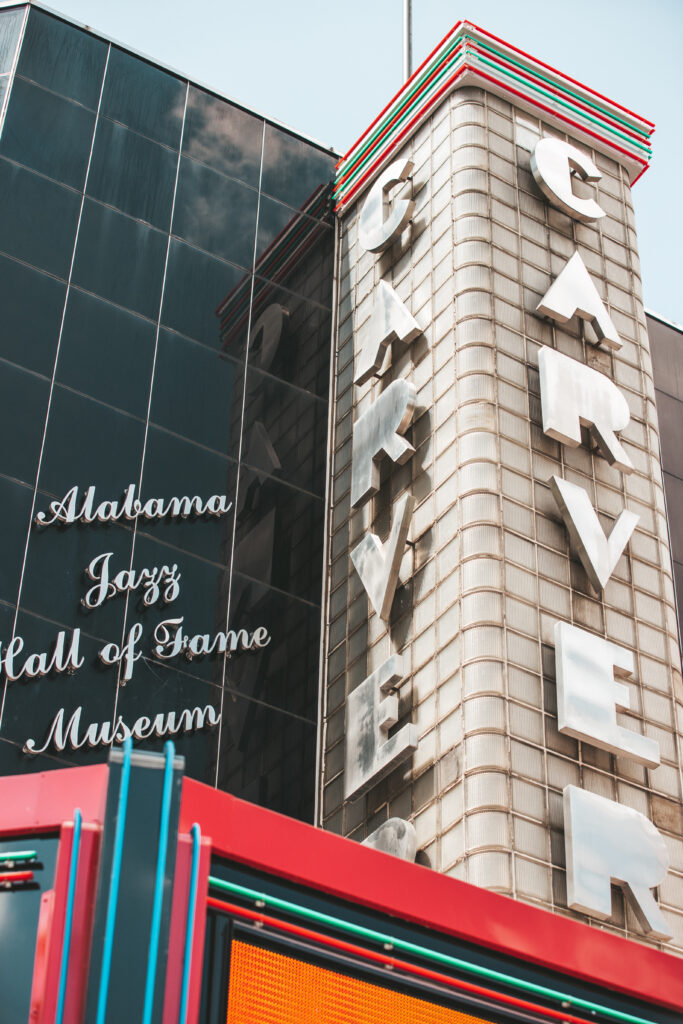 We vacated the building in July of  2017, so they could start total demolition of the interior. I mean, all the way down to the studs. They tore out everything. For a while, the building was totally exposed to the elements. There was a stall for about a year, but then renovations resumed.

Now that I see the walls and floor again, it’s easy to envision the space alive again, and that sends out a lot of positive energy to the neighborhood.

So when will it be officially open?

We want the grand opening to be grand, so we would rather wait and do it right. That said, we haven’t named a date yet. I try not to be bothered by the exact date and focus on opening when we’re ready. The community has been so patient and so helpful. They have gone so far as to hand deliver packages and keep a close eye on the place in each stage of the renovation. They’ll help you do everything and anything. They’re eager to use the space for community events, and we’re excited to have them.

I know a big part of your renovation focus has been a historical one. What treasures have you uncovered? And how does this new space honor the legacy of jazz in Alabama?

We have over 200+ inductees in the Alabama Jazz Hall of Fame. I can’t highlight them all in our space, but I’ve been able to do a lot of research. I’m so amazed at how much they’ve accomplished, gold records and songwriting, Carnegie Hall, etc. in their lifetimes. Many were also educators and passed down their jazz knowledge to younger generations. 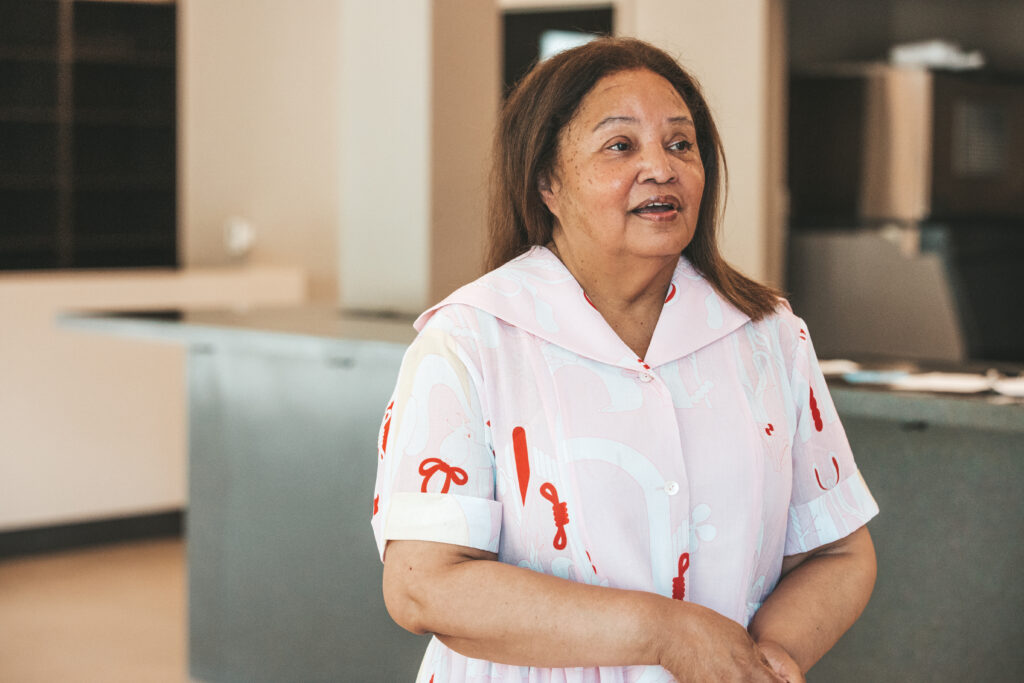 Amos Gordon is a good example. He was a teacher, performer, and musician who changed so many people’s lives. He made time to pass down his musical talent. He was so great and encouraging. He was a bubbly Birmingham native. I wish I’d had the chance to meet him but I’m glad we have some great photos and recordings of him.

We also have Ella Fitzgerald’s glasses upstairs. Her music sheets were in a huge font so she could see, but it didn’t stop her from performing. She came to visit Birmingham on a trip and found out that a lot of the inductees were people she used to play with in her band. That familiarity made her endearing to Birmingham. She received the key to the city, and her estate actually sent us some of her personal belongings because she was so impressed we had supported and preserved people in her band.

We’re working on getting all of our historical displays together for the opening. It will be lIke a little museum exhibit, with Ella and Cleve Eaton featured, as well as several gold and platinum artists. The museum will be housed in this building with its own operating hours.

Why do you think it’s important for the kids and families of Birmingham, today, to understand and appreciate the jazz history in this City and in this neighborhood? 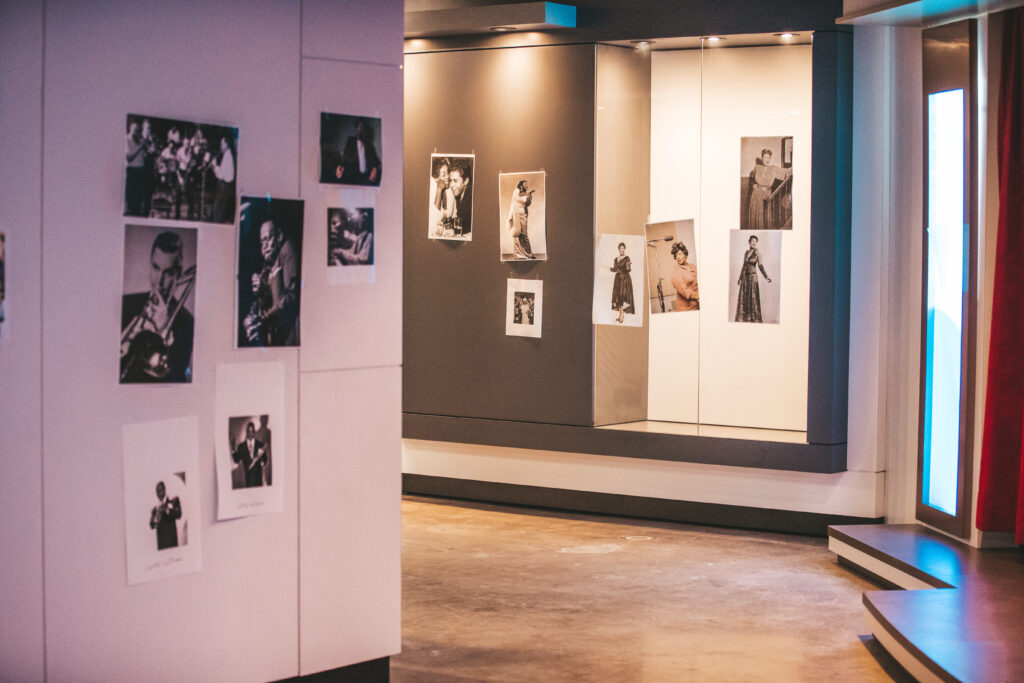 Jazz was the only original art form created in this country, and now it’s celebrated in so many countries around the world. If it’s not passed down, it may disappear.

It’s in so many new forms now, and I see the kids we work with get so enthralled with the music, regardless of the particular jazz style. I think they’re drawn to jazz because the main component is improvisation. Improvisation is such a respected part of the art form and gives a voice to the music. Students love that, and it’s something you can’t learn in traditional musical environments. You have to be very accomplished to do improvisation well. And it’s democratic because everyone has a chance to add their own voice to the music. I want to keep passing that on. Learning to read music is an important tool, but I love seeing that skill used to move into improv, especially when it’s done well.

I was a theater minor in school. I also loved to draw, paint, make jewelry and play the violin. I’m an extremely artistic person. I also love directing plays. It’s so rewarding to take new actors, and mold them into the character they’re playing to get emotions out of them. It’s an amazing process.

Honestly, I wish I had grown up in a time when people had film schools because I think I could have been a good director. I’m a movie geek, and I have a big passion for film. 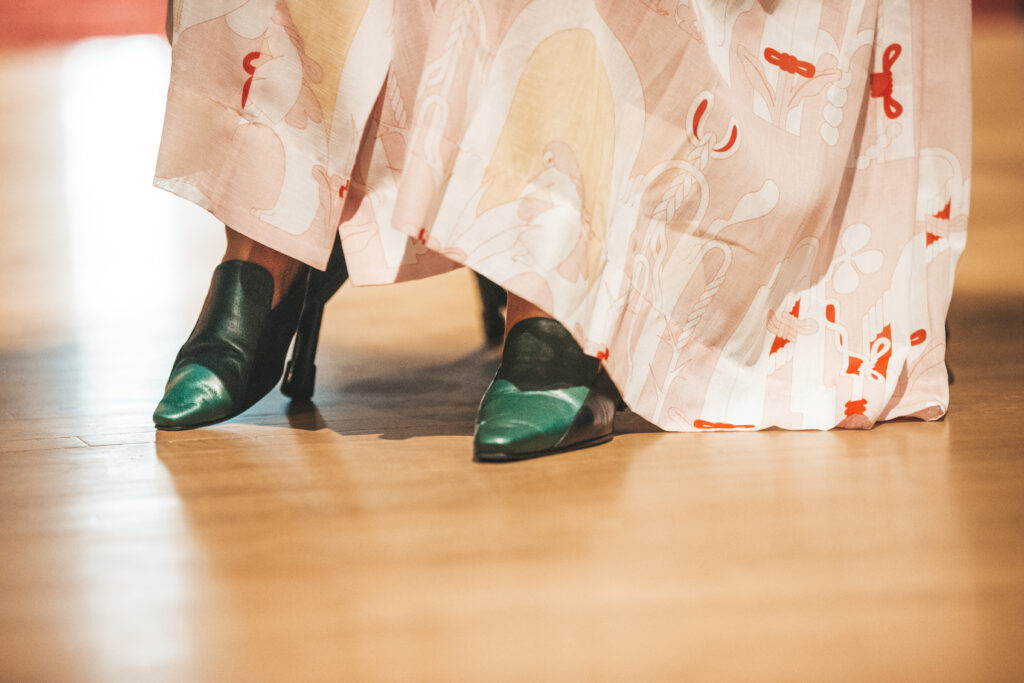 I did manage to fall in love with jazz too. My love for jazz comes from my father. He was a big jazz lover. He lived in New York for a while and would frequent the Cotton Club. He’d also play those old 75 records. I remember the voice of Billie Holiday and so many beautiful songs.  I knew they were heavy and different from every other style I was listening to at the time. That made me want to listen more. My brother and I would go so far as to sneak out in high school to go to jazz clubs. My brother could drive so we could go, and they didn’t even card us. it was a mellow vibe back then.

Speaking of that love of listening, I think readers might be interested to learn more about the jazz radio station that’s also housed here. When did it start? Where do we listen? And how do you manage it all?!

Yes, WAJH – Alabama Jazz Hall. 91.1FM! We have a station manager who manages the radio station. It’s 24/7 except for Sunday mornings. You can also download and stream the station’s content. We have so many people volunteering to help us make it work.

Our grand opening will also include the radio station moving here, in a cozy nook right below where we’re sitting.

That space will also host the Birmingham Black Radio museum project, where they’re building exhibits leading downstairs to the radio station. My friend Bob Freidman is leading that effort, and they’re going to share soundbites of black radio announcers on the jazz station. 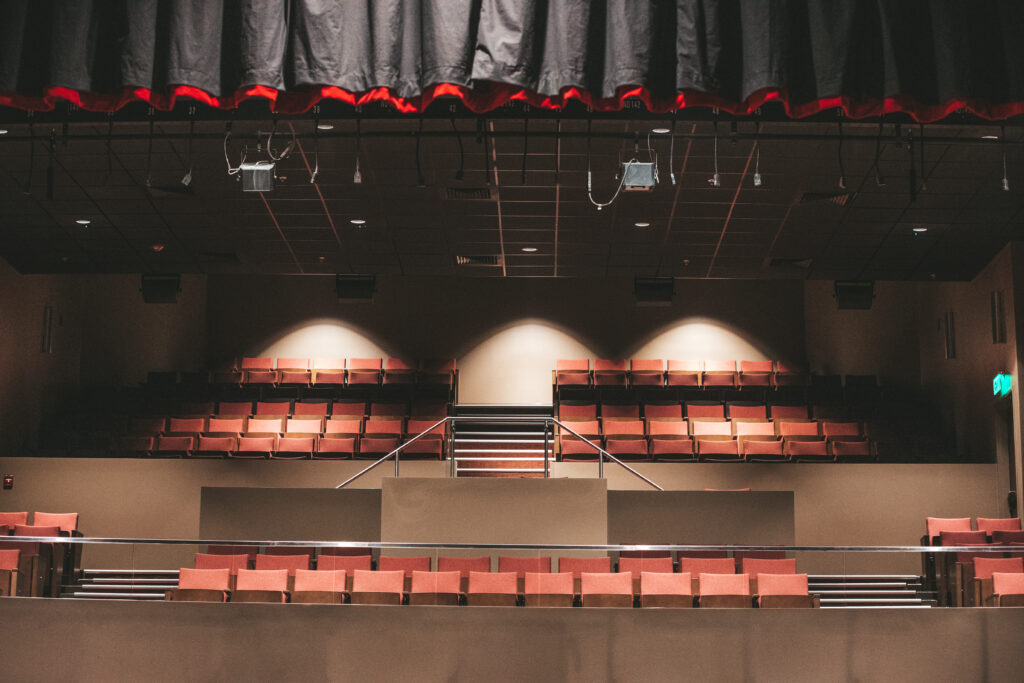 What does your upcoming season look like? And how do you think the activation of this space will influence the Historic Black Business District?

We aren’t quite ready to announce a season yet, but I’m definitely thinking about what it’ll be.

There is no doubt that The Carver’s reopening will further activate the neighborhood.  It’ll be a community space that I hope will have a great impact on the businesses around here.. Across the street, the Masonic Temple is also going to be renovated.  I’m excited to see that kind of activity happening.

If you had to name your favorite jazz artist…

Oh no…  this is so hard to say. Daniel Jose Carr.  He embodies everything about a true jazz man. He also teaches Saturday classes, and he’s an all-around true jazz man. He does a jam session every Thursday night. He’s the real deal. I have to mention Dr. Tolton Rosser too, who used to be the head of the Birmingham heritage band and is also an educator. He kept that band running for over 30 years. They’d rehearse here every Wednesday night to keep that band going. 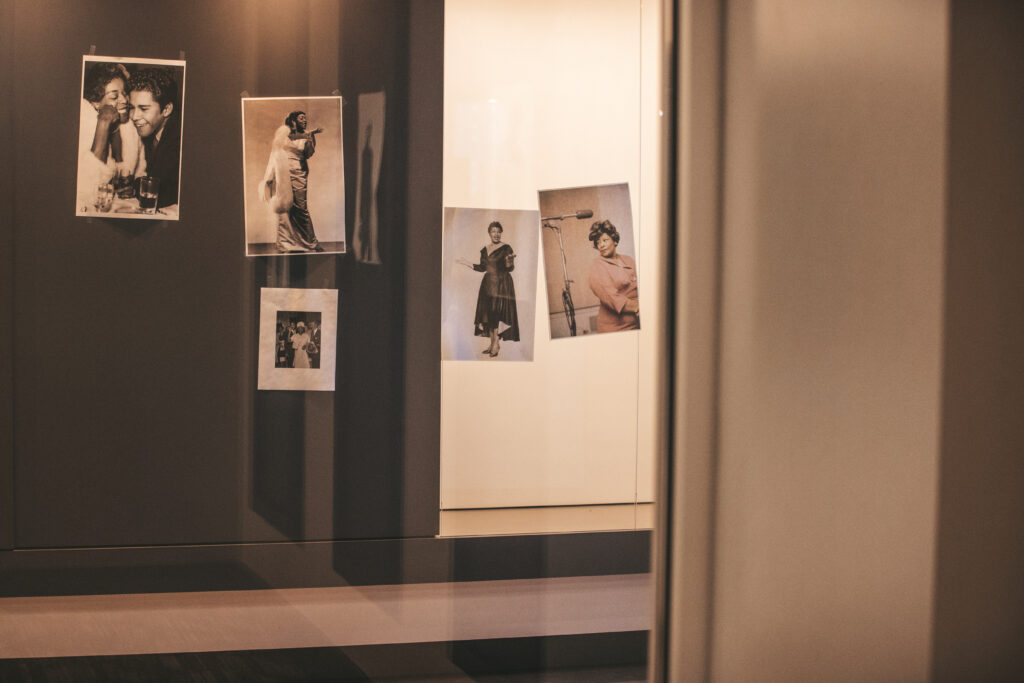 I remember often finding a special nook or view in theater spaces I frequented when I was a performing artist – How about you? Any favorite little spots of solace or beauty you’ve discovered at The Carver?

That’s a great question. I haven’t found that nook in the new space yet. But in the old one, it was on the second floor looking down into the museum. It was my “wow” space because I felt like I was standing down looking over our history.

You must be so proud at this moment. It’s a huge accomplishment and a gift to our community. Congratulations, Leah. What’s your hope for the next generation of jazz?

I’m hopeful that we’re going to meet some new jazz artists that maybe even open up a new form of jazz and keep the art form evolving. A new artist, a new party. Let’s see what they do differently.