"I always go the extra mile because you don’t know when that opportunity comes to you. You never half-do something. You always go full force. It’s always better to be prepared."
Interview by Meghann Bridgeman
Photos by Ambre Amari
Cameron Sankey is a beloved Birmingham gospel and jazz artist as well as the founding CEO of Playworx Music Group. We joined him in his home studio for a memorable morning of conversation, music, and reflection. 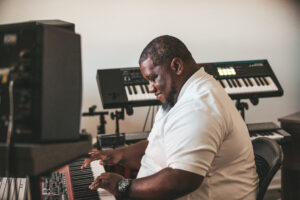 You often cite your father and uncle’s relationships with music as the earliest and most influential in your life. Can you describe the way they interacted with music and how it informed your perspective?
I guess I have to go all the way back to my grandmother Katie Sankey. She was a gospel artist and had a calling to record gospel music. I remember her saying that she couldn’t find musicians to play with her for the long haul, so she prayed for musicians, not knowing that they’d end up being her sons and daughters. All four of her children are musicians. And so watching them, as a family, do this whole music thing was really impactful. They’d rehearse at the house and then hit the road together.

Family connection to and through music is really important to us. And that is certainly part of my worldview now too. Even though my kids have musical abilities, we pay close attention to passion and support our own children in their passions. I’m there to support people in pursuing their passion.

Outside of family influence, as a kid growing up in Birmingham, did you interact with the local music scene much?
Yes! Wow. Yes. My generation had a whole lot of creatives, and it showed at an early age. I started off at Baker Elementary in Ensley. I started playing violin there in 3rd and 4th grade. I actually went to music class looking for drums, and they only had a snare drum. I wasn’t interested in the snare drum, so my teacher handed me a violin.
We ended up performing at Birmingham-Southern in 5th grade. I attended Bush Middle school when band directors Daniel Carr and James Lewis were there. You know, they really single-handedly saved a lot of people’s lives out in Ensley. They had a jazz band. And that jazz band went on to take us to the Birmingham Youth Jazz Ensemble, where I had the opportunity to meet a lot of talented jazz musicians. We met people like Cleave Eaton and Tommy Steward.
The staff at Bush Middle School and the Birmingham Youth Jazz Ensemble really poured into us as young musicians. My high school years were spent at Jackson-Olin, and by the time I went there, my friends and I were already performing at a professional level… so much so that we could book events.
Musicians have to be immersed, and I was so lucky to have that example early on. I saw my teachers and band leaders. They shared their stories from the road with stars like B.B. King. It was so inspiring.

What was your first musical instrument?
The drums. I started playing the drums when I was three. My dad is a pastor, and the story goes that whenever the choir started singing, I would drum along, on beat, with pens, or whatever I had in my pocket, on the church pew.
I was also connected to the drums through my Uncle. He was a drummer. When he performed, I planted myself right behind him backstage and mimicked everything he was doing.
When did you know that you wanted to make music your career?
Earth Wind and Fire did a pay-per-view, live-by-request show when I was nine years old. You had to call in and wait to see the show. I’ll never forget how much fun the musicians were having. I couldn’t believe they were getting paid to do that. So I thought, I can do this for myself. I’m going to be a musician.
So many dedicated artists make the brave transition from the local scene to the national stage. Did you ever have a moment of doubt, or struggle, as you climbed to the national level? If so, how did you overcome that?
Oh yeah. Yeah. Being from Birmingham, we aren’t as supported as other mainstream cities like Atlanta, Los Angeles, New York, or Philadelphia. I would say, to overcome my times of doubt, I’m a man of faith. I had the realization that my given gifts had a unique timeline, meaning that my time would come. So I just kept my head down and focused on perfecting my craft. 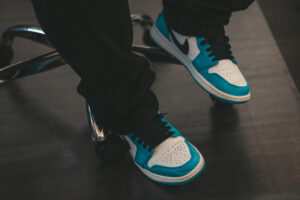 And you have indeed, very successfully, made music your career at a national and international level. There are so many highlights to share… touring with Grammy award winners and working with artists such as Ona Watson, Yolanda Adams, and India Arie. What moments stand out to you? And why were they so meaningful?
You know, I started playing with Ona when I was 16. I was too young to even be in the clubs we performed in. I’d have to wait in the car until five minutes before the gig. I was then escorted to the stage to perform and had to go back to the car during the break. Ona is one of the artists I met through the Birmingham Jazz Youth Ensemble.
Micah Stampley really stands out. I was playing at church, and Micah was in town. The church ended up hosting an impromptu concert the night before The Magic City Classic. Sometimes backup musicians are needed at the last minute, so I went through his hits and made sure I knew how to play them before the concert. Luckily, he did need support, and I ended up playing for him that night. We got into a great groove, and he stayed over the weekend to see if our chemistry was real. By the end of the weekend, we were still working really well together, and two months later, his team sent me dates for the next two years. I ended up spending the next twelve years traveling with him as his music director. We went everywhere. I mean all over the world. I think the only place we missed is Antarctica. I’ve done three CDs with him, and that’s where I got my Stellar nomination from.
We’re still close. I actually just did a show with him two weeks ago in Los Angeles.
What really stands out to me in that story is your forward-thinking preparedness, Cameron. It wasn’t lucked that you knew how to play those songs at the right time. It’s the perfect example of good timing and thoughtful preparation.
I always go the extra mile because you don’t know when that opportunity comes to you. You never half-do something. You always go full force. It’s always better to be prepared.
In addition to your performance career, you’re the founding CEO of Playworx Music Group, a music production studio. What kind of projects are you focused on?
We are a full-service music production company. We do it all. From facilitating concerts to writing lyrics. Currently, I’m working on a LaDonna Mole project. I also just finished my project Perspective, which came out in May.
I’m most excited about Perspective because I’ve always loved jazz, and I’ve mainly done R&B and hip hop, along with some classical stuff. This time I decided to do something for myself. I wrote eight of the ten songs and included two that were covers I’ve just loved forever. Ona Watson would sing “What you want to do for love” by Bobby Caldwell every other Saturday. After that much exposure, you either love it or hate it. I love it. It took about a year to create, and I’m proud of it. 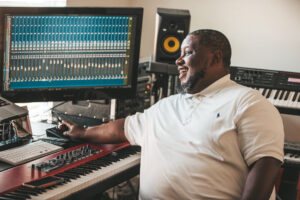 Is there tension between balancing producing and performing? Do you have a preference for one over the other?
It’s always a fight between producing and performing. There are two different sides to being creative. When you’re producing, you’re taking a raw thought and trying to birth it into an idea. And from that idea, you can develop concepts that ultimately become music.
Performance, on the other hand, is all about feel and where you are in that moment. Improvisation is the best example. It’s so amazing. It’s what that person feels and hears in that moment. And it’s not repeatable.
Sometimes I just want to play, and sometimes I just want to work on the production side, which is more analytical. I like that people can reference your work decades down the line when you create new music.
It takes a lot of discipline to tow both lines. Some mornings I have to give myself a talk in the mirror and establish what it is I’m going to do that day. I can’t do both at the same time. And I often reward myself with playing when I can. Even though I enjoy both, I think the reward is the performance.
And speaking of balancing, I’d be remiss not to mention that you’re also the father of five beautiful children! Any advice for your fellow creative parents with entrepreneurial spirits out there?
The advice is, make sure that you understand that your family comes first. Sometimes you get caught up in providing for your family – but that takes time away from your family. At 2 pm, I shut it down so I can be present for my family. Put your priorities in order, and it will always make your life better.
I’m lucky to have them. My family is my motivator. If you’re going to do something, you go all the way with it.
And, of course, we all want to know, are any of your children musicians?
Justin, my oldest, knows his way around the piano. Jason, my second oldest, is a drummer. Isaiah, my baby boy, is a trombonist. Isabella loves to sing, and Olivia might be a pianist as well. We don’t know yet.
Even though they’re all musically inclined, two of the kids have really found a passion for sports, and two are balancing concert band with sports. My wife Courtney is also a musician. She played the violin, and she sang in the choir back in college.
Where do you see yourself in 2023?
Right now, I’m really pushing Perspective. It’s on all digital platforms and widely available. Since Playworx Music is independent and not affiliated with a label, my main focus is to see how far we can push this project. The plan is a tour in the southeast first and see where it goes from there.
I also have a few artists in the works now that I’m excited to work with, so be on the lookout for that.
PrevPreviousNow Hiring: Full-Time Community Engagement Manager