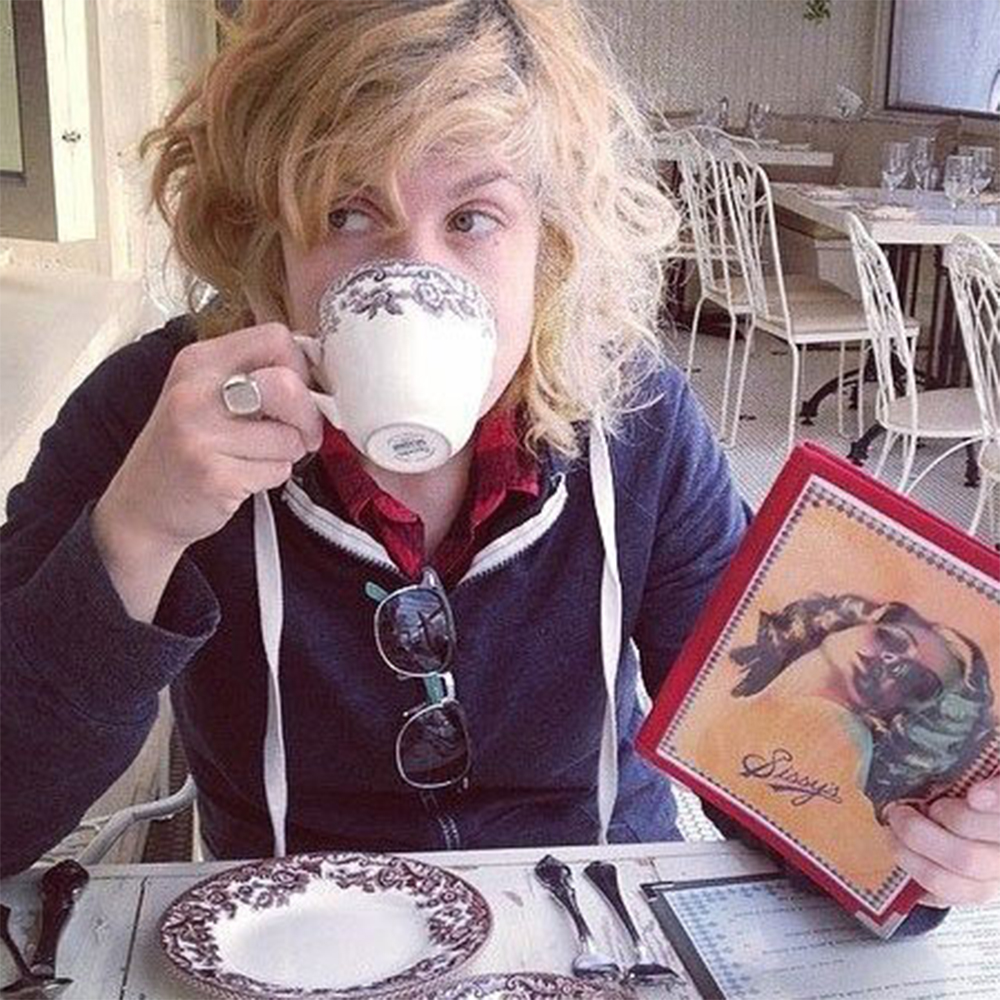 “My favorite part of the process is seeing it all come together, looking at the grid when it’s printed and seeing all those films….It’s like making a mixtape for someone. “

Rachel Morgan is the Creative Director & Lead Programmer for Sidewalk Film Festival as well as an instructor in the film department at Lawson State Community College. She and her programming team worked tirelessly to bring more than 250 films to the festival this year.

You’ve been working with Sidewalk Film Festival for more than a decade. What changes have you seen in the festival programming?

I am in my eleventh year with Sidewalk and prior to being a programmer and creative director, I volunteered for a couple of years. When Kyle McKinnon and I began eleven years ago, the programming really began to change from what it had been before, and the indie film world is ever-changing as well, so that also has had an impact. For one, we began programming a lot more films, just in terms of numbers – our goal was (and is) really to have something for everyone – so if a conservative grandmother wants to come to Sidewalk we have films for her, but we also have something for an un-shockable liberal 20-year-old and everything in-between. It’s an unrealistic goal, but we kind of love unrealistic goals. We can’t make everyone come to the festival, but let’s try. We can’t have a line-up that has films that appeal to everyone on the planet, but let’s try. We love genre films and we like to make sure we fit as many in as make sense; that’s been a bit of an evolution too.

For a number of reasons, including the more rapid move from theatre to VOD (such as Netflix or Amazon), we’ve also grown the special event programming over the years and that has very much become a part of what Sidewalk does – free tarot readings and fortunes handed out at the door last year at The Love Witch, show chickens on site for Chicken People, a sample cocktail for a film about bartending. In general the festival really is so much bigger than it was ten years ago. So much has changed really; I think I could write an essay on this question.

What trends have you noticed in this year’s film submissions?

In regards to content, the tone and overall temperature of film this year seems to reflect that of the culture as a whole – this year films have been much darker, overall, than in the last few years. Lots of films, both narrative and documentary, that have topics related to aging, chaos, memory, tension, politics. I’m interested to see what 2018 brings. Stylistically, it’s not a terribly radical year. There were more found footage docs than normal, more thoughtful and patient cinematography than usual, and the last three years have been drone footage heavy in docs and narratives.

What advice do you have for aspiring filmmakers? How can someone get started “in the industry?”

My track was via film school and I highly suggest it. I loved film school, both undergrad (SCAD) and graduate (UA). I learned a ton; I established some of the most important friendships of my life; and I made a lot of films. Full disclosure, I’m also a college film instructor at Lawson State.

I also think that making films with anything that you can get your hands on is a great start, and if all you can get hold of is pen and paper, great, that’s where it all begins – write a script or a treatment, brainstorm doc ideas, shoot a film on whatever you have access to, and if you can take a film class do. Taking a film class is the quickest and cheapest route to getting your hands on a camera/equipment. Heck, a class is, generally, cheaper than an iPhone. Finding a partner that you can work with is a good idea. Film is rarely a solo endeavor, and having someone who can serve as producer to director, just for example, can be of great help. Seek out others who are interested in making movies. And, of course, there’s always just getting on set, volunteering, going to a Sidewalk Salon, or attending a panel at the festival. Introduce yourself to a filmmaker and offer to intern on their next project. Countless people have done that and now have jobs in the field.

Do you have a rubric for a great film when you are screening, or do you just know it when you see it? What do you look for?

That’s actually a more complicated question than you might think. There are all kinds of things that come into play. The easiest (and maybe most boring) to talk about is production value – does it look good? And how does it look? Movies on Lifetime can look good, but that doesn’t make them good films (not that Lifetime movies can’t be; I love a great/awful Lifetime movie) and it certainly doesn’t make it right for the festival. We’re always looking for something innovative – positively innovative and interesting. If I’m still thinking about a film a week later, that’s a really good sign even if I didn’t love the film. I sometimes have a three-strike rule: “Oh man, that performance is really weak in that scene,” strike 1; “Oh wow, the dialogue is horrid,” strike 2; “Oh no, no, no, really bad audio in that section,” strike 3. That said, we’ll overlook certain things for an incredible story and/or innovative, interesting, and provocative filmmaking, so we like rules that can be bent or broken.

We also look to fill in areas. We like to have a good horror film (or three), several comedies if at all possible, a food documentary (people love that kind of thing), etc. I’ll jump up and down on my couch if and when I find something super exciting. I try to keep the process fun. I also look for a very special film to put in the Alabama Theatre on Sunday morning, something that isn’t a huge audience draw, but that deserves to be screened in that amazing space. I often do a melodrama; I think it’s a fun way to start the festival Sunday.

What sets Sidewalk apart from other festivals?

Filmmakers are here to celebrate their films, not to sell them, which makes Sidewalk a lot of fun. We go out of our way to pull all the hospitality punches – the number of parties and what is offered at those parties, it’s just not normal (in the best way). Our venues are incredible – the Alabama Theatre is the most beautiful theatre in the world. It’s fun to see stuff in all of our venues and neat to walk from screening to screening; it truly feels like an event. Also, our audiences are awesome.

I’ll also say, I don’t know what’s up with this, but look how many people meet and start dating at Sidewalk and how many marriages come out of that. I’m not mentioning any names, but more than one filmmaker has moved to Birmingham because they met someone at the festival. Something is clearly in the air, it’s kind of creepy. We’ve joked about starting a side dating service like OK Cupid.

Can you paint us a picture of the behind the scenes of programming? What’s your favorite part of the selection process? What do you find most challenging? What’s something people typically don’t know?

How much time do you have? It’s not the healthiest endeavor. There’s a lot of pizza involved and that’s a blessing and a curse. At a certain point in the year – June and July mostly – I’m watching films for 18 plus hours a day for days/weeks in a row. I try to take breaks and go on walks and do jumping jacks and that kind of thing, but it’s a bit insane. My programming partners all have their own methods, but all are a little crazy. Charlie Sanders is a madman; his goal is to watch every single film entry.

We have a screening committee that helps us sort through the 1,000 plus entries, and we couldn’t do it without them. That process really starts in December. We have meetings with our committees and we have programming meetings, which sometimes include arguing. As soon as the festival is over, we talk about what went right and wrong and start planning for the next year. We start watching films in December and pull in our screening committee in January. I go searching for films and invite them to screen with us, which is a whole other part of the process that involves a lot of research, traveling to other festivals, and talking to a lot of filmmakers and distributors. Corey Craft is really great to about “have you seen this… you should check this out.” He watches more films than a person should be allowed to, and someone should do an article on his movie collection.

The most challenging aspect relates to something people typically don’t know. We can’t just screen any film that we want. It can really be a fight to bring some of these films to Birmingham, and it’s not free to do so. Working with distributors can be very tough, and it’s a very surprising part of the process. The methodology and logistics around screening a film is something that books could be written about. Some distributors are awesome to work with, and some are very tough. Every film in the festival represents a great deal of time spent, and some of the bigger films often take weeks, sometimes months, of work. There’s a lot of rejection in the process. We reject films. Films reject us. It can run you down. I’ve likened it to being the biggest dork in school and trying to get the prom queen to go out with you. It’s tough, but sometimes that happens. Opening night is insanely difficult to program. It’s tougher than I’m sure most people realize. Scheduling is also a challenge. The film grid is like an evil game of film chess.

My favorite part of the process is seeing it all come together, looking at the grid when it’s printed and seeing all those films. It’s pretty neat. It’s like making a mixtape for someone. There’s something really rewarding about that, especially if they like it. And, of course, festival weekend, seeing everything come together, the excitement of opening night, people from the films that we’ve been looking at for months in Birmingham and walking down the street, it’s all pretty amazing.