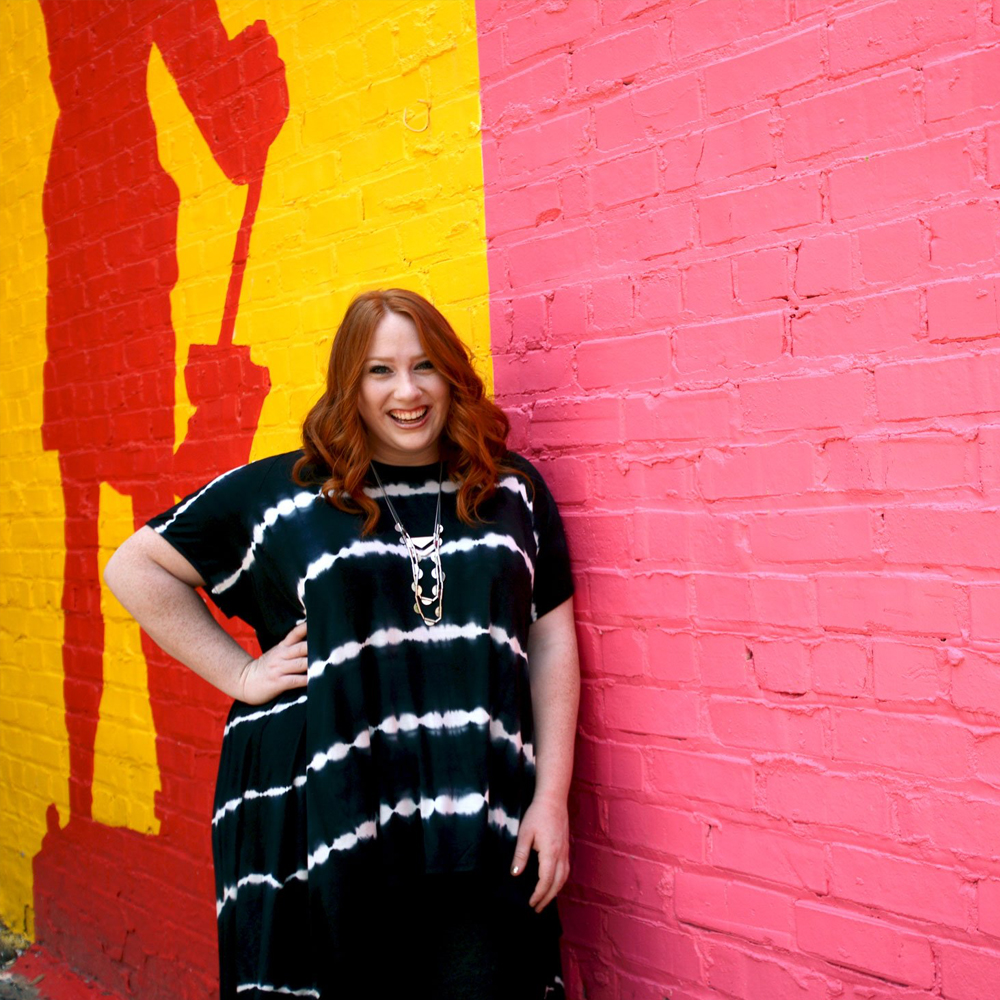 “Someday, we want kids that have grown up in schools with underfunded arts programs (or having been told to muffle their creative aspirations) to be able to look around and see reflections of themselves on the walls of Birmingham. We want them to be able to proudly say, ‘This is MY city.'”

As the Executive Director of Blank Space Bham, Meghan McCollum knows that a wall is never just a wall. Her organization sees blank spaces that many might simply pass by as opportunities to create murals that strengthen community, foster creativity, and reclaim public space through the power of public art.

As advocates for the redevelopment of inclusive urban spaces, what do you think makes public art, especially large-scale street art, such a powerful tool in neighborhood revitalization?

We believe in placemaking — that, as a community, we have an active role in shaping our neighborhoods, which in turn shape who we are as individuals. It’s this beautifully cyclical relationship that often operates around a concept referred to as the “Power of 10+” which basically says places thrive when people have a range of reasons (10+) to be there. Public art, especially murals, can easily occupy one of those 10+ slots while simultaneously playing a supporting role to the other aspects of thriving urban spaces (like local businesses, smarter designed public infrastructure, well lit streets etc.) Murals have a direct correlation to how people perceive the place in which they occupy.

Street art really just ticks all the boxes in terms of accessibility, and being visually stimulating. It is one of the purest embodiments of what revitalization, or the word “revitalize,” means — to bring new life. That’s powerful. Street art acts as a sort of invitation to pause. When we’re allowed to dwell, to switch gears and exercise our creativity as a community, even and sustainable revitalization will follow.

What services does your organization offer to for-profit businesses and non-profit organizations? What are some of the different models you develop with your clients to fund the creation of their murals?

Blank Space operates as a public art advocacy group promoting pre-existing murals and artists as well as pushing for new projects. Within that, we offer consultations with potential clients (both for-profit and non-profit), in which we learn more about their space and project goals before connecting them with artists from our network. From there we move into the design phase, having multiple artists create renderings which will be used in proposals presented to clients before ultimately refining a singular design for a final bid. We tend to meet clients where they’re at in terms of funding as far as offering any sort of assistance, or by helping them get connected to artists that can work within their specific budget. In the past, we’ve definitely relied on crowdfunding, but have also worked with organizations that can meet the costs without having to turn to different fundraising efforts. All of this, of course, impacts the timeline of the project, but we’re more than happy to help organizations through the process.

As we grow and have more commissioned projects from for-profit organizations, we’ll be able to expand our own mural seed fund through donations incorporated into final project cost, in addition to individual donations made to Blank Space directly. This fund will eventually enable us to directly assist in paying for community walls or pieces for smaller non-profits that would not be able to afford a mural on their own.

Blank Space is not only dedicated to fostering more mural projects in Birmingham, but also to encouraging local muralists. Can you tell us about your goals on this front?

Too often cities are not a complete reflection of their people’s character. By not only advocating for more public art, but for local muralists, Blank Space is advocating for authenticity. We’re advocating for an opportunity for a whole collection of people that cannot see their identity reflected through the persona of their city to have a voice. When done thoughtfully and intentionally, murals not only reflect the spirit and aspirations of a community, but also of an individual artist. Providing opportunities for those individuals to marry their talents into this greater cacophony of artistic voices throughout the city will hopefully give an immense feeling of empowerment to newer and more practiced creatives alike.

Our goal is to be the biggest cheerleader for muralists in Birmingham. Not just “Blank Space artists.” Everyone. We want to help get artists connected to public spaces to display their work. We want to help them grow in their craft. We want to mentor them, and build community. Someday, we want kids that have grown up in schools with underfunded arts programs (or having been told to muffle their creative aspirations) to be able to look around and see reflections of themselves on the walls of Birmingham. We want them to be able to proudly say, “This is MY city.”

What have some of your favorite projects been to date, and why?

Asking this is like asking a mother which one of her kids is her favorite! You love them all for their own reasons. Honestly, I’m just so incredibly proud of each individual we’ve been so fortunate to work and create with. If I had to pick though, the mural Marcus designed and painted with a whole team of awesome folks over at the intersection of 1st Avenue North and 39th Street N. would be my favorite project to date. It was the first time I’d truly seen of all our hopes for what Blank Space is and can be come to life. Those guys were out there in the freezing cold of December, painting away, not to glorify themselves, but to give back to the city we all love so fiercely. It allowed me this glimpse into the hearts of the people I get to work with — to witness their dedication and love, not just for our cause, but also for one another. It was an inspiring thing to watch.

Quickly after the completion of the mural it was tagged with the words “no gentrification.” The piece was restored, we issued our response, then sat back and watched in amazement as the community rallied around Blank Space and the goodness that comes from public art. Not only is it just an incredible piece of art, but the mural also became a sort of catalyst for some much needed discussion on gentrification (one that needs to be continued)! That was the first time I think I truly grasped the scope and impact of our mission.

Are there any public art projects you have seen in other cities that you would like to see replicated in or adapted for Birmingham?

Public art advocacy is not a novel idea by any means. Organizations like Mural Arts Program up in Philadelphia or Living Walls in Atlanta have absolutely pioneered revitalization in their neighborhoods by focusing the lens of progression through street art. We’re not even a year old yet. I definitely look to their programs for inspiration in terms of goals for growing our own network and resources.

What’s great about what we’re trying to do here in Birmingham is that we’re not the first, or only ones, to be doing it. We’re capitalizing on the environment and hoping to come alongside those that are already doing amazing things for their communities by cheering them on and supporting them to do more. We’d love to find a partnership with someone that will enable us to have a rotating gallery wall somewhere so we can use it as a teaching/showcase space for muralists. Having a space to incubate new ideas on rotation would be invaluable.

A longer range dream of mine would be to partner with the city in creating collaborative pieces on/for covered bus stops — highlighting clever design and shining a light on the importance of establishing a more highly developed public transport system in our growing city. We’re all about making art accessible, and if we can use that to bring the city forward, you better believe we’re going to try and get it done.