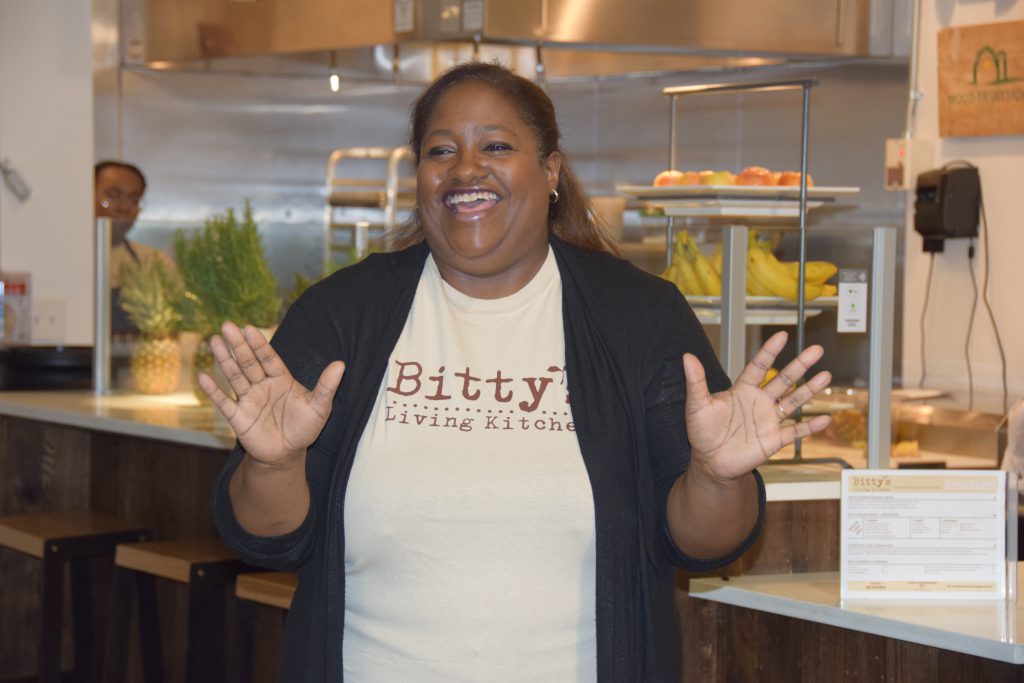 “Write out your plan. Attempt to execute it. Adjust. Revise. Adjust again. Having your own restaurant means you must be willing to grow and change at the same time. But it’s a good thing.”

After participating in CO.STARTERS, Chef Kimberly McNair Brock, opened Bitty’s Living Kitchen in REV Birmingham’s REVeal Kitchen, a culinary business accelerator in The Pizitz Food Hall where she serves her healthy “living food” creations as she works toward opening a brick and mortar in Birmingham.

Your passion for cooking started at a pretty early age. Would you mind sharing that story?

I have always had a passion for cooking. I remember sitting in the high chair in the kitchen with my mother as she cooked and watched Julia Child on the television. I was stirring something in my bowl like melted ice cream or something.

When I was four, my sister and I started getting up on Saturday mornings, while my parents rested, and made breakfast. Lisa, my sister, always wanted cereal – a cold breakfast. I wanted something hot and made fresh. Lisa, who was about seven years old, went to my mom complaining. My mom said, “Lisa, just scramble her some eggs.” Well, she did, and those were the worst eggs I had ever tasted. The next Saturday Lisa said I better be happy with cereal because she wasn’t attempting to scramble eggs again. I went in the kitchen, figured it out myself, and scrambled my own eggs. The rest, shall we say, is history.

You have a background in visual art as well. How did you make a transition to culinary art?

For most of my time spent at Auburn, I wanted to go to culinary school. I would entertain with friends and was always being adventurous in the kitchen. I wanted to go away to school after leaving Auburn, but at the time, being a chef was sort of frowned upon or “not cool.” I thought everyone would think it was stupid. I hid my desire to go, but it kept tugging at me.

You graduated from our CO.STARTERS program last fall. How have you applied the program’s concept of starting small and scaling up to Bitty’s Living Kitchen?

I am always testing new things. The tools that I learned through CO.STARTERS are invaluable. I initially wanted to do so much more with my menu, but I had to pare down. At first, we wanted to do a full-blown breakfast, but that was the only place where we used dairy. It just wasn’t smart to lead with breakfast right out of the gate until we were able to test our market fully.

What have you learned in your first month at the REVeal Kitchen at Pizitz?

Less is more. Some restaurants have more than one location and are able to bring food in or share in the prep for items. But for the most part, many of us only have the one location and we just can’t offer EVERYTHING we would like to in this space. That’s why, probably much to our customers’ chagrin, we often use the term “Coming Soon” or “for a limited time” because we simply can’t offer everything all the time.

Where do you see Bitty’s Living Kitchen after REVeal?

Hopefully, in a stand-alone spot and with multiple locations. We have been approached by a few interested parties and we are exploring our options.
What advice do you have for other aspiring restauranteurs and entrepreneurs?Write out your plan. Attempt to execute it. Adjust. Revise. Adjust again. Having your own restaurant means you must be willing to grow and change at the same time. But it’s a good thing.

Keep the faith. You can’t please everyone or offer what one person wants all the time. But that’s ok. We have people that eat with us three or more times a week and sometimes bring friends. So, I know we must be doing something right.