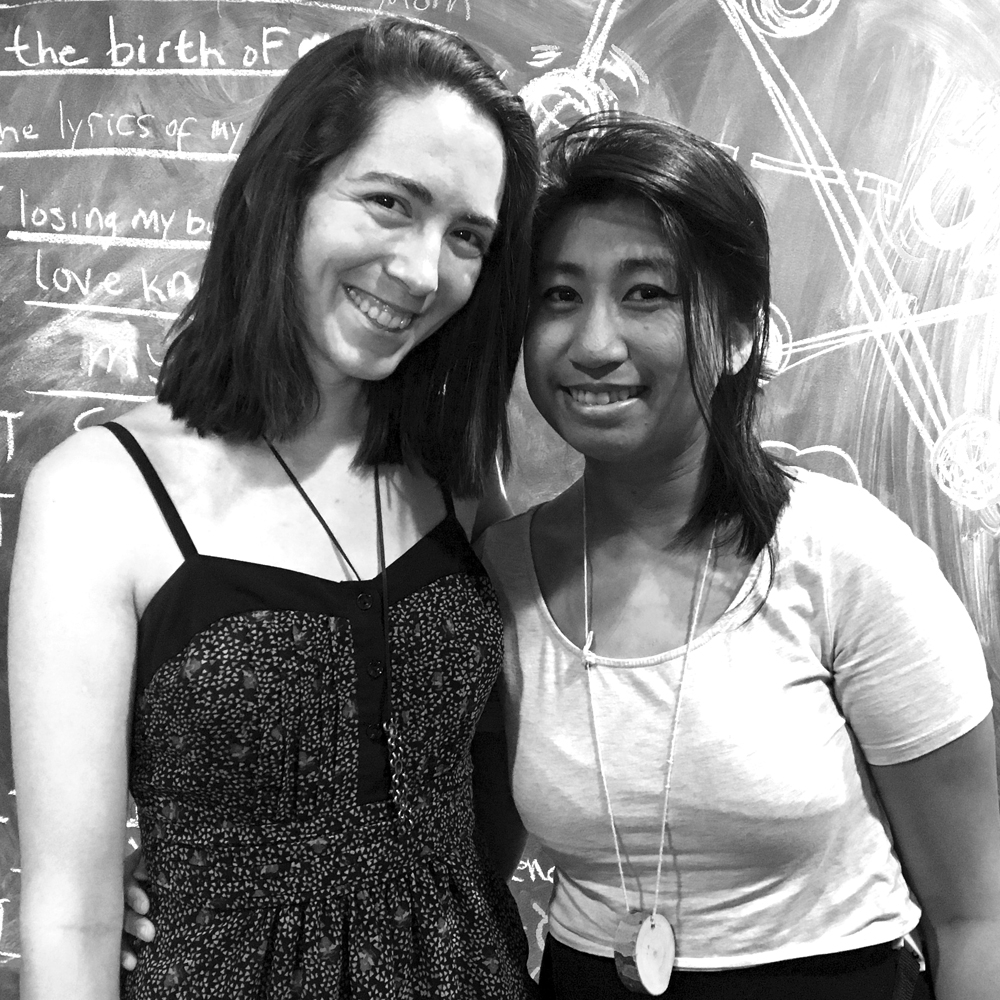 “Our main goal was to translate information, not just the scientific components of memory but also the artistic. But we also wanted to provide a platform for people to engage in their own personal curiosities.”

Name: Lauren Hlubny & Carleen Sabusap
Occupation: Lauren Hlubny is a Brooklyn-based experimental theatre director. She is a Producer and the Director of Performance for this project.
Carleen Sabusap is a third year PhD student at UAB. She is a molecular biologist who studies cystic fibrosis and is the Producer of this project.
Creative Industry: Performing Arts
1. Tell us a little about what RE: Memory is and the events that came out of it.

We have had three events. Each event had two research seminars featuring research at UAB about memory – from the perspective of which parts of the brain use memory and what stages the brain goes through to store memory. Then we had an artist work with an audience member to turn a memory in to a melodic piece of art. The third piece of our event was a dance and musical performance. Instead of it looking at how we remember, it focused on the experience of remembering.

We wanted to give an example of how we created the performance piece. So we brought up an audience member who had experienced a particular section of our science/art exhibit in the nostalgia station – where you could experience different sensory stimuli that would invoke memories.

We had an audience member join the singer from New Orleans on stage and give us a story of a memory that one of the nostalgia stations stimuli invoked. As she listened, she would write down the waves of the story for each section of the memory. Then they would tell the story again and she would sing the melody she was inspired to sing with them. Then once more, she would sing without them.

2. Where did the idea come from?
I knew Carleen from Florida State. We both spearheaded different undergraduate programs. Mine in the arts, and hers in the sciences. We have always wanted to do something like this. When Carleen called me in October, I was on the bus on the way to Maine to direct a circus show. She was telling me about Birmingham and how she wanted to create an arts/science performance/lecture crossover. She asked me what was currently inspiring me artistically. I told her the subconscious and memory. She said, “I just ran in to an incredible neuroscientist who is a colleague of mine that studies memory at a lab at UAB.” So we got her on board and it snowballed from there.

Megan, the neuroscientist sent us articles on long-term memory consolidation. I then came up with a choreographic proposal for the performance section of the event.

3. What was your goal at the event?
Our main goal was to translate information, not just the scientific components of memory but also the artistic. But we also wanted to provide a platform for people to engage in their own personal curiosities. A lot of people came up to me afterwards and told me “this reminds me of a great idea I had…” We wanted artists to think differently about science and scientists to think differently about art. Now we are having people come up to us and say, “I have this great project. What if we use electricity and dance…” And then I had dancers come up to me wanting to integrate dance with the zoo.

4. Do you think this is opening up a deeper conversation for arts integration?
We did a workshop at a school that highlights the fact that science and art can inspire each other. We created a dance piece with 7-10 year olds around empathy and sense memory. In the beginning they didn’t have any questions for us and didn’t feel engaged. But after the experience, the entire class was asking questions.

There is an intrinsic desire for curiosity. People keep forgetting that the renowned scientists were also artists. We are trying to blur the lines between the disciplines. We wanted to take STEAM one-step forward and really integrate arts research and not just arts.

5. What’s next?
We are hoping this concept is a platform that people can continue to work on in Birmingham. We wanted to have three kick off events that could show what could happen when you pull together all of these great hearts and minds in to the same room. Currently, we are still working on exploring avenues in Birmingham between the arts and sciences. We are planning on taking the ideas that have come out of this and share them with other cities. We want to show people some of the amazing things that are coming from Birmingham.
The reason it is called RE: Memory, is not just from memory, reconsolidation but also literally, reply. So we have been dabbling with the thought of taking this to other cities and maintaining the idea that this is Birmingham’s collective memories.