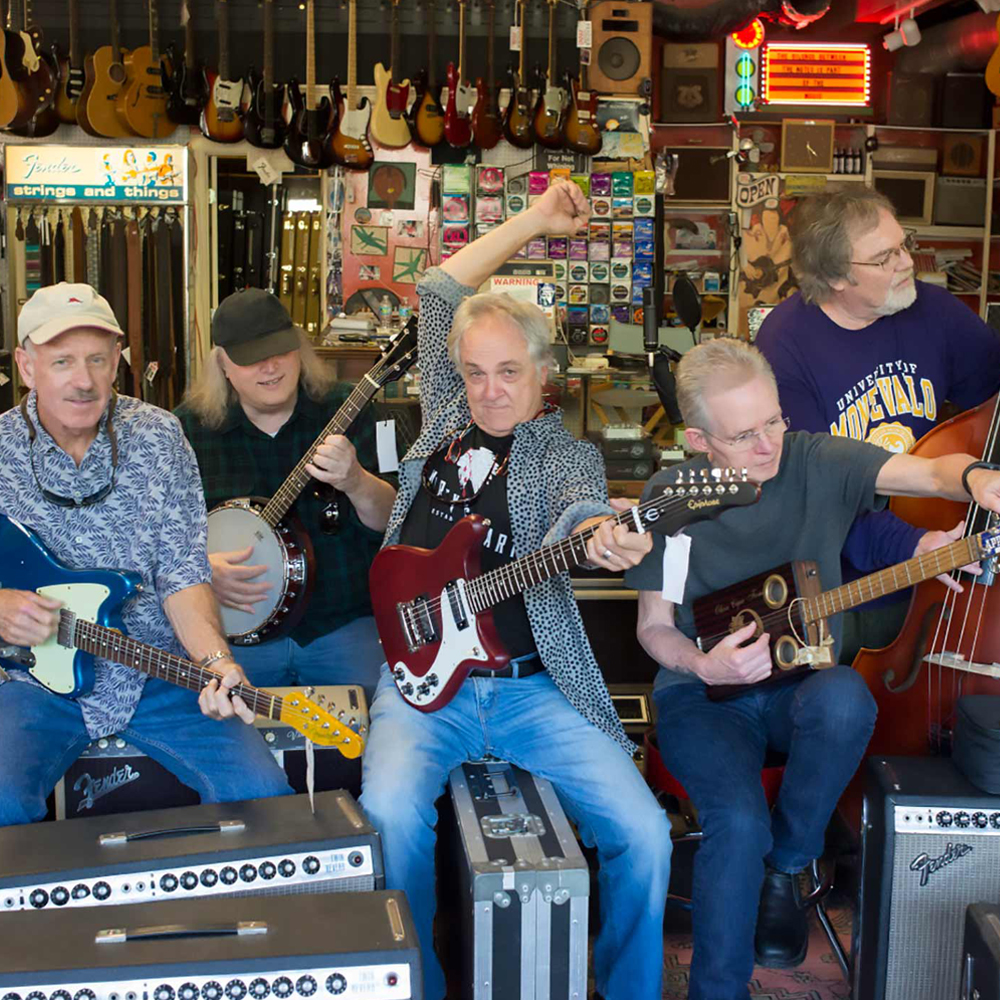 “Secret Stages is doing a really good job of getting local/regional/national acts together with crowds here who otherwise might have never heard of and/or gotten see them perform.”

More than forty years after the members of Dogwood played their first notes together in an old farmhouse outside of Montevallo, these stalwarts of Alabama’s 1970s music scene have recorded their first studio album. Long-time fans and new audiences will have the chance to experience them live on August 5 as part of this year’s Secret Stages Music Discovery Festival.

Dogwood has an unusually long and rich backstory. Can you give our readers some of the highlights of your original five-year run?

Doug Lee: Some of my highlights would be some of the opening slots we played: Flo and Eddie, Robin Trower, Dion, Lou Reed. And working with Paul Hornsby. Also a highlight would be some of the kindnesses showed to us by people we met on the road, like the folks who took us snorkeling in Gainesville…in those days of week-long engagements in clubs, we had a chance to really meet people and sometimes that led to fun times. Some of the shows we played on campus at the University of Montevallo in the early days and the back porch shows we did in springtime most years were great.

Don Tinsley: One gig I consider a highlight was the night we played a club in Cheraw, S.C. An older guy came in and said that Dizzy Gillespie was outside in his car and wanted to come in and jam with us. A number of my extended family members were jazz musicians so I knew who he was and it made no sense to me that he’d want to come jam with a country rock band, but you hear a lot of crazy stuff in clubs. So I just went with what I thought was a gag, said yeah man, go bring him in, and then in fact it turned out to be true. Cheraw was where Dizzy Gillespie’s parents lived and had a hog farm. Later he said he’d gone out to serenade the hogs and scared them all off so he was just looking to get out and play some that night. We didn’t know any jazz but he played FANTASTICALLY along with whatever we did. I was standing next to him the whole set, and it was really a wonderful experience. After the set I was apologetic about not knowing any jazz tunes and he basically told me that it didn’t matter, that it’s all just music, you find where and how to fit in, you watch and listen and find something to say, something to play. Wow, what a great sentiment to pass along, huh? It was one that’s stayed with me.

Another of the highlights for me was getting to play some really good clubs with their own scenes going on. Some of the standout clubs with great crowds were The Crazy Horse in Birmingham, Richard’s in Atlanta, The B&L Warehouse in Athens, The Longbranch Saloon in Gainesville, The Beach Party & Adler’s in Panama City, Madam Lovejoy’s in Kansas City, The Yellow Hydrant in Bowling Green, Beggar’s Banquet & The Windmill in Louisville, and Jumpin’ Johnny’s in Tuscaloosa.

It was also great to be in the same town on the same night with friends’ bands such as Warm, Buttermilk, Humbug, Black Mountain, and Sail Cat to name a few, and a lot of fun sitting in on each other’s sets, catching up on breaks, and hanging out late night after the gigs.

What inspired the band to get back together and record an album more than four decades later?

Doug: Being constantly asked by people if there was any way to get some Dogwood music. There were demos floating around that we made in the 70s. This was an opportunity to get something of a higher quality out there. The old demos were taken from ancient tapes that deteriorated over the years, and then they were copied and copied, losing sound quality each time. And just the personal satisfaction derived from the process.

Has your style of working together changed in your current incarnation, given the wide range of experiences you have all had in the local music scene in the interim?

Doug: I would say our style of working together isn’t much different from the early days. Maybe it would be if we were tackling a lot of new material.

Don: One difference is that time has passed, four members of the band from different periods have passed away, and there’s not a Dogwood house anymore. Most of the band lived at the house most of the time and it was always a pretty immersive, tight knit scene. Still, we’ve managed to remember how to play together and to me it feels like the spirit’s still there.

Who were some of Dogwood’s major influences initially?

Don: Like Doug said, main ones were Buffalo Springfield/CSNY. I’d add to the rest of his list The Beatles, the country blues period Rolling Stones, Delaney & Bonnie & Friends, the Faces, the Beau Brummels, not always obvious but still as undercurrents in what we were about.

Are there any new sources of inspiration for your work today, whether from a musical or cultural standpoint?

Don: Old, new, or in between, off the top of my head I guess I really like and listen out for Lord Huron, Fleet Foxes, The Decemberists, Alejandro Escovedo, Nick Lowe, some of Jack White’s stuff among others. I also think Steven Van Zant’s Undergound Garage venue related projects and Neil Young’s ongoing projects are culturally significant, along with environmental and political concerns here, though how anything actually filters into creative endeavors is at best a mystery to me and I’d like to keep it that way.

How do you feel the local and/or regional music scene of today compares to that of the 1970s? What kind of impact does a festival like Secret Stages have on Birmingham artists and audiences?

Doug: I am no expert on the local music scene today, but I do know there are many, many more bands doing original material than there were in the local 70s. Back then it was suicidal! This will be my first experience with Secret Stages, but I am honored to have been asked to play.

Don: Seems to me there are more places to play in the metro Birmingham area and more acts of varied genres to play them than ever before. I think Secret Stages is doing a really good job of getting local/regional/national acts together with crowds here who otherwise might have never heard of and/or gotten see them perform.