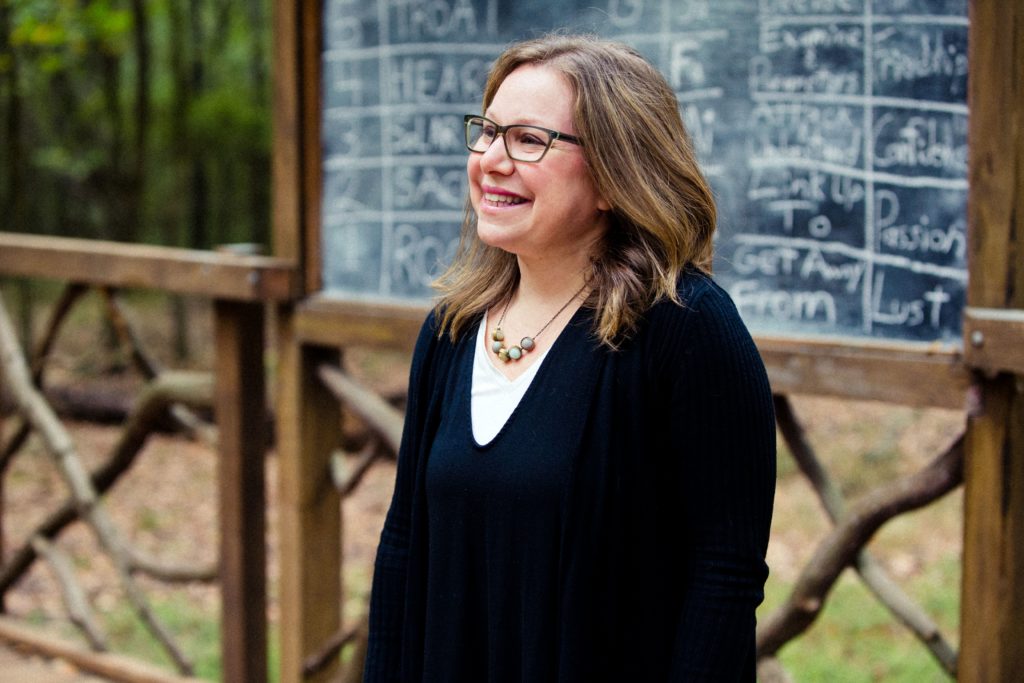 "We have such a deep, deep storytelling tradition here in the south. That’s part of what we are known for nationally and internationally in terms of literature. But we haven’t had a major presence in the film industry and are so often poorly illustrated in mainstream media. I really saw this as a powerful way to add this region’s voices to the chorus to help understand what life is like in America." Michele Forman has irons in a lot of fires, from co-founding Sidewalk Film Festival and UAB’s Media Studies program to serving on the board of Red Mountain Park. The former Director of Development for filmmaker Spike Lee, TEDx Talk alum, and environmentalist has combined her passions with the film fellowship program Southern Exposure. On October 20th at Sidewalk Cinema, Southern Exposure will be screening films as part of the annual Wild and Scenic Film Festival. Michele shared with us, on a hike at Red Mountain, her journey in filmmaking and why southern stories need to be heard.
Michele, you are from Birmingham but stepped away to chase your dream of working in the film industry. Where did that dream originate?

I grew up in Birmingham and had this desire to get out and experience something completely different. I would devour issues of Interview Magazine, listen to the Velvet Underground, and imagine New York City and my place in it. I made my way to the northeast by way of Harvard. Afterwards, I jumped at the opportunity to continue my dream of living in New York and got a job as Director of Development with Spike Lee’s 40 Acres and a Mule Filmworks, finding new material for him to executive produce. It must have felt exciting to have such an incredible opportunity and platform for storytelling at that time. What led you from working in the city you idealized for so long back to your hometown?

I found my way back to Birmingham when I was working on the Academy Award-nominated 4 Little Girls, a documentary for HBO about the bombing of the Sixteenth Baptist Church in 1963. I saw my hometown in a different way. That project lit a fire under me, and I realized that there were really crucial southern stories that needed to be told. We filmed that in the summer of 1996, and so many of the people we spoke to who lived through the Civil Rights Movement had never even been asked or felt okay talking about their experiences during that time, or in the aftermath, when there was no appropriate criminal justice response to those terrorist acts.

That coincided with a pretty exciting movement in the history of film and media: the dawn of digital video and digital filmmaking. That was an attractive opportunity for UAB, and I was able to start a nonfiction film program for the university that focused on justice issues, civil rights issues, and life in the south. You are often recognized for your involvement in Sidewalk Film Festival. How was that born and how has it grown?

When I was moving back to Birmingham, there were a number of things that I really wanted Birmingham to have. One was an independent art house theater. Sidewalk Film Festival was the first thing I wanted to work on. Early on, I connected with Eric Jambor, Wayne Franklin, Kelly Franklin, and Alan Hunter, and we started the first Sidewalk. That was twenty-one years ago, and one of the things that we saw was that there was this great core group who really supported us. But the festival has also helped grow a bigger audience that loves independent film. In the past, there were a lot of important films that passed Birmingham by, and Sidewalk has been a vehicle for sharing those stories that need to be heard.

You also helped develop the filmmaking fellowship Southern Exposure. What does this program mean to you and why is it important within the film industry and environmental movement? The structure of Southern Exposure combines my love of teaching with my love of working with emerging talent. We put out a national call for applicants from film schools and graduate film schools as well as self-taught filmmakers, offering them a paid summer fellowship here in Birmingham covering environmental topics across the state of Alabama.

We have such a deep, deep storytelling tradition here in the south. That’s part of what we are known for nationally and internationally in terms of literature. But we haven’t had a major presence in the film industry and are so often poorly illustrated in mainstream media. I really saw this as a powerful way to add this region’s voices to the chorus to help understand what life is like in America.

There is a vital environmental movement happening locally. I don’t often use the term “blessed,” but I’m not sure how else to describe how fortunate I am to live in a place like this with an abundance of beauty and a variety of natural landscapes. We are one of the most biodiverse places on the planet. I think a lot of people associate the environmental movement and the activism and action with California, and that’s where the Wild and Scenic Film Festival originated. But there are issues and special places in the deep south that need to be saved, and that there are amazing people doing important work here. Those stories have been completely absent from the national dialogue on environmentalism. I thought a storytelling initiative centered around that was just about one of the best ideas I’d ever heard! I got pulled in to develop Southern Exposure, and it has been one of the most personally rewarding experiences of my life.