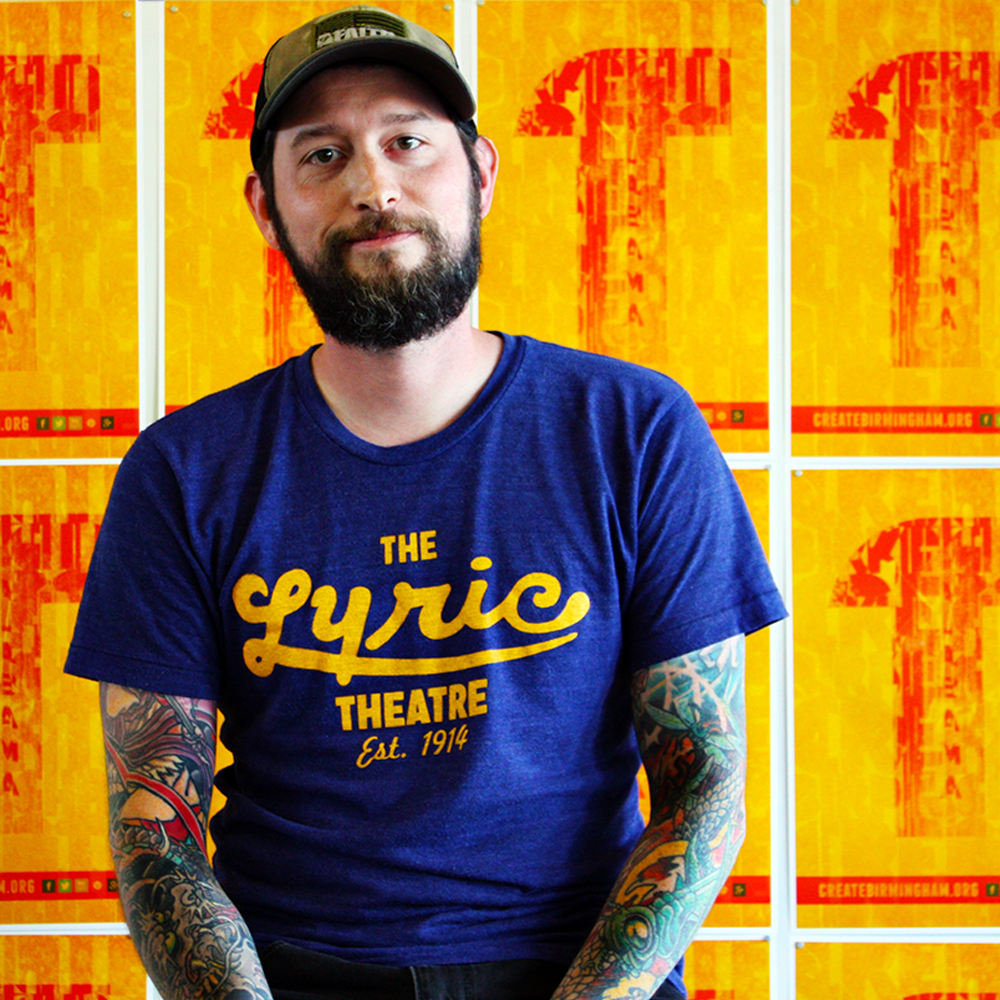 1. What does Creative Birmingham mean to you?
I’ve grown up in Birmingham and seen it change over the years. I’ve noticed that my generation is interested in building a creative community that seeks out jobs to support our creativity. We want to contribute to making our city an interesting place to live and work. Birmingham is an approachable place for creatives because it’s on the cusp of being big but small at the same time which creates collaboration. I think it will be interesting to see how we connect these do-ers to more resources and help grow this sector.

2. What would you like to see happen in Birmingham in the next 5 years?
I would like to see more grants for public arts, A SKATEPARK, collaborative spaces, and design programs for kids. I would also like to see the removal of the giant vinyl Pepsi banner from the 2 north 20th building and replaced with something more “creative.” Revitalization is happening and we’re attracting more and more people from out of town. It would be nice if the first impression of downtown was more representative of the city as a whole, not an advertisement.

3. Who are some other local designers that inspire you?
I’m inspired by many of my friends who are local designers. Forrest Millsap, a local metal artist and fabricator, challenges me to think about designing for different mediums. I’m also inspired by my wife, Brooke Schwartz, who choreographs and dances for the Erynias Tribe and designs and creates her own costumes. Recently, one of my major inspirations has been from my friends in the culinary arts. I’ve immersed myself in learning the art of cooking. I make bacon, boudin, sausage and tofu. Based on everything I’ve learned about the smoking process, I’m working with some guys on designing a smoker too.

4. You designed the new Create Birmingham logo, can you tell us about the design process?
The process is first driven by the name: Create Birmingham, which is very open-ended from a design perspective. My first inspiration came from a conversation with Forrest Millsap about innovation in Birmingham. He was telling me about the history of the use of powers hammers and especially their role in the Industrial Revolution. The idea that something as simple as a hammer and how it has played such a major role in the creation of our city was intriguing. That’s where the idea of the hammer as an icon began. So I started the design process with the hammer concept and created a “T” and kept going from there. I followed up by designing a set of letters that would be minimal enough to put the creative first, while maintaining the identity of Create Birmingham. It was a fun experience to design a logo based on the creation of a new font. The whole thing really came together when we began projecting a negative of the first concept over a piece of artwork hanging in the office. It was interesting to explore the concept further because the logo really lent itself to illuminating the different categories of the creative industries, from visual arts and crafts to culinary arts. Eventually, I really want to give the creative community the opportunity to interpret it in their own way too.

5. What are you most looking forward to during Design Week Birmingham?
The Creative Roundtable with Henry H. Owings and the lecture by Aaron Draplin.

6. You are also accomplished graffiti artists, what’s the craziest place you’ve tagged?
That was a long time ago. Since it has been so long, I guess its ok to say. An Interstate overpass in Cincinnati with Mr. Daze. When the 18 wheelers and buses passed, it felt like you would be sucked off the small ledge. That was a good, scary night.