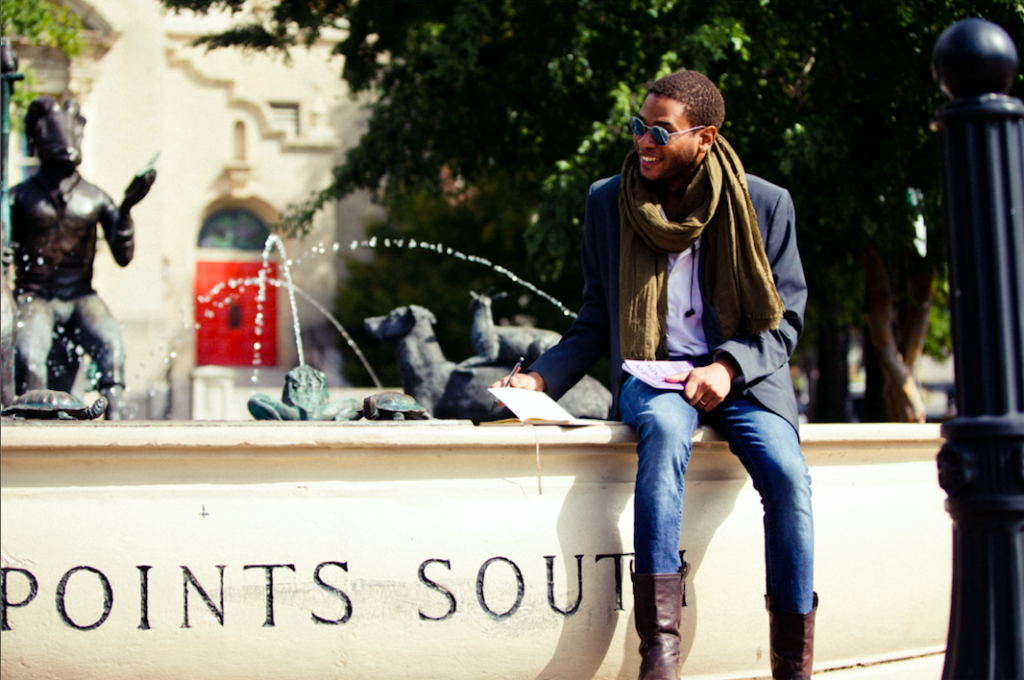 "We crave connection, and I think that is what theatre is all about — connecting stories to audiences and, more importantly, finding the common experiences and emotions that connect us all."

Carlton Bell was born for the spotlight. Recently the actor, filmmaker, director, and producer has stepped into the role of founder and artistic director for the Birmingham Black Repertory Theatre, a nonprofit theatre company focused on supporting and showcasing work by black creatives. With an upcoming production of Donja R. Love’s Sugar in Our Wounds at Theatre Downtown in the works, Carlton talks to us about what has inspired them and how they hope to inspire others, what fueled them to return to Birmingham to start a new theatre, and how they have learned to redefine success.

Carlton, you are invested in working with young, aspiring actors and have set up an educational element to BBRTC. Why is that important to you? What do you enjoy most about the workshops you’re conducting? I grew up in Shelby County and went to Shades Valley Theatre Academy where I studied under Roy Hudson. I knew then that it was a great program, but I don’t think I truly recognized how great and how spoiled I had been until I got to college and realized how prepared I was. That early investment that was made in me has absolutely fueled my mission at BBRTC to develop educational programming to work in public schools.

The theatre community, particularly the black theatre community, in Birmingham is very small so our actors and choreographers are also the people teaching in our public school systems. We set up workshops where kids get the opportunity to learn how to audition, dive into a play, and understand how to connect with and develop a character.

One of my favorite exercises we do I picked up while working at Birmingham Children’s Theatre. It’s a study on status. You draw a card from a deck of cards, and that determines your status. For example, a two of clubs is on the low end, and maybe you are conditioned to associate that with someone who lives on the streets. Maybe you draw a jack of hearts and, in your mind, that makes you a Mark Zuckerberg. You line up according to how you perceive your status and, without saying a single word, you interact and shake hands with the other characters. It’s an interesting social experiment because I can see where these kids are placing their value — both imaginary and personal. I had one young black girl in a class of mostly males who always ended up with the ace but she kept placing herself at the back of the line. In a silent room that speaks volumes, and it opens up a space for us to have a valuable discussion. What experience has set a standard for the impact you hope to make as an actor and a story-teller?

Charlotte’s Web changed my life. That sounds funny — to have this play at a children’s theatre make such an impact — but it had everything to do with our director, Charlie McGrath, and how she commanded the room and gave us space to play. As an actor, you don’t typically get that. Parameters are set about your character, and it’s your job to conform to the story. On the surface, Charlotte’s Web is about a girl who saves a pig, but Birmingham Children’s Theatre cast it with two black leads. It became a think-piece about this black woman saving this black man from being killed and let the audience experience something heavy but beautiful in a way that was accessible and appropriate for all ages.

There’s another moment with Brandon Bruce, who directed Peter Pan, that sticks out in my mind. When we began that project, he turned off all the lights, turned on music, and asked everyone to spread out and dance around the room. When he turned the lights back on, we’d all found each other in the middle of the room. To me, that says something. We are drawn together by energy. We crave connection, and I think that is what theatre is all about — connecting stories to audiences and, more importantly, finding the common experiences and emotions that connect us all. Finding that emotion and connection within our company was a crucial skill we had to learn in order to tell this bigger story.

How did your acting career evolve into starting a non-profit company? What challenges did you encounter? How has it changed the way you view success? I started acting when I was young because I wanted to be the center of attention! I’m a Gemini! I loved being on stage, singing the big songs, and doing the big numbers, and I dreamt of being on Broadway. It took me until after college to realize what that passion meant and how it needed to unfold in my life.

I was hyper-focused on making money, and I accepted a position in Birmingham with a retail company I’d been working with throughout school. I loved it, and I was good at it, but I woke up one morning and felt like I had wasted all of this potential and training to do something that I was meant to do. I quit my job that day. I was broke and had to move back in with my parents. I re-enrolled in theatre classes and started again at the bottom. I couldn’t get auditions, and I ushered at productions just to meet people. I felt discouraged and moved away from Birmingham for a little while, to Atlanta first and then to New York where I was booking gigs and had an agent. But, ultimately, I began to question what was stopping me from writing my own play. So, like the millennial that I am, I googled “how to start a production company.” I learned that while I had the aptitude to do that for myself, I lacked the resources. I put a pin in that plan.

Around that same time, Birmingham Children’s Theatre offered me a contract, and so I came home. I was working with BCT, but I had auditioned for Choir Boy on Broadway before I left New York. That same idea of starting a production company continued to scratch at me, and I’m not sure where the gall came from, but I knew I just had to do it. I acquired the rights to Choir Boy and decided that show would be BBRTC’s first play. The city of Birmingham, AIDS Alabama, my family, and the community responded, and we received incredible support and funding. What was a community theatre production became our dream show.

I can admit that I started this company for selfish reasons, but what I’ve learned is that I’m just a vessel for something bigger. The weight of that hit me after a production of Choir Boy when a student of our choreographer revealed that he had been struggling with feeling isolated and planning to commit suicide. He said that seeing a black, queer kid on stage changed his life. That’s when it stopped being about me. You will star in the upcoming production of Sugar In Our Wounds, written by Donja R. Love, and directed by BBRTC’s current artist-in-residence Damone Williams. Why is this show important to you? What does it mean to you to debut this show in Birmingham?

It tells a love story through the LGBTQ+ lens that weaves through significant moments in black history. It takes place with the anticipation of the Emancipation Proclamation and has such richly written characters. It feels important — particularly here in Birmingham with our history of slavery and civil rights strife. I want to create opportunities for black actors, writers, directors, and choreographers. This show is the perfect vehicle for that, but it’s a story that I think will resonate with all audiences.

I really love Birmingham. My friends laugh at how passionate I get about my home, but there’s something right now about this city that is a magnet for the arts. We have stories to tell, and we have a population that is hungry for connection. The opportunities are there if you’re willing to make them, and people from all over are quietly coming here to be a part of the magic we have.