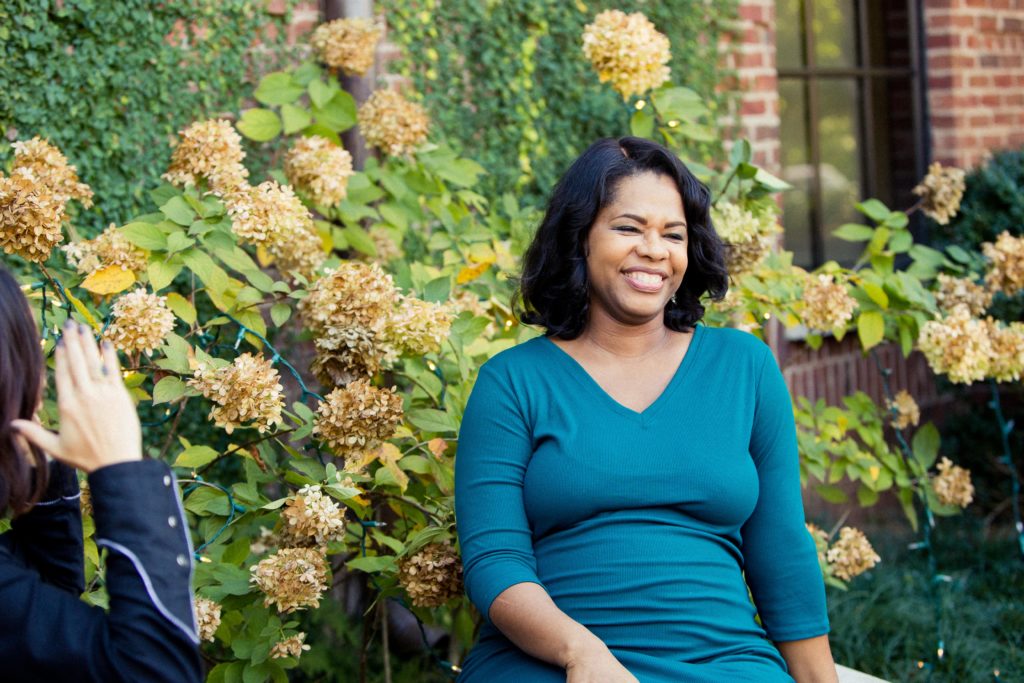 "There’s nothing wrong with having a career in a non-creative field, but if you are unhappy and pining for something else, that’s what you should be pursuing.... [my mom] said I was brilliant and didn’t need to fit the same mold in order to be brilliant and engaging and successful." On Tuesday, October 29, Randi Pink’s timely Girls Like Us hits bookshelves and is sure to spark conversation in response to its politically charged story. The Birmingham novelist spoke to us about her passions — both creative and personal — and where inspiration and community can be found.

Girls Like Us is historical nonfiction that addresses a weighty subject. Why is this a story you needed to tell?

This is my second book. It’s set in 1972, mostly in the rural south but also in Chicago. The story follows four young girls, ages 14 to 17, who get pregnant pre Roe v. Wade. Each girl has a unique circumstance and experience.

The concept came in 2016 right after the election and really just lived in my iPhone notes for a while. Two years later, during the Kavanaugh hearings, I wrote the book in its entirety in thirty-one days. I rage-wrote it — in carpool lines, while nursing my daughter, sometimes with one index finger. It was truly a passion project that quickly turned into a published novel.

Even as a child, I’ve always gravitated towards the oldest person in the room. In kindergarten, I preferred to hang with the teacher rather than play with other children my age. As I got a little older, I spent a lot of time with elderly black women from the south. At gatherings, I noticed that they were always left alone in the corners. I felt comfortable talking to them, and I think they must have felt comfortable enough around me to tell stories of what they had experienced in their past. In the eighties and nineties, the topic of backwoods abortions seemed to come up a lot in those conversations, and those stories stuck with me and even haunted me. The characters in Girls Like Us are inspired by those conversations. Are the experiences of your characters universal or specific to women of color? Did culture play a part in the sense of shame, choices, and consequences for girls then? Do they for young women now?

Specific to the black community, a young, unwed, teenage pregnant girl who becomes ill or dies isn’t usually front-page news. And in the seventies, it wasn’t even a blip on the radar. I’m not sure how that compares to other communities, but in redlined Birmingham nobody cared.

One of the four characters is a white girl from an affluent family in the suburbs of Chicago, and her path is different. Money breeds options, so this wasn’t just an issue of race but of socioeconomics as well.

Dating back to slavery, the church has played an integral role in the black community because that was all we had. Every generation in my family, since the 1800s, has been very tied to the principles of the church, and if those principles were bent or broken, there was hell to pay — especially for a young girl. The shame that is part of that culture meant these girls were sent away, to terminate pregnancies or secretly have babies, and then return as if nothing had happened, and at such tender ages too. They had to privately process their trauma while the prospective fathers – sometimes boyfriends, sometimes abusers, and sometimes older notable men in the community – went about their business. So much of your motivation was fueled by what has happened politically in the past several years. What was your response following the bill signed last spring in our state banning abortion and penalizing those who would obtain one?

Alabama is ruby red, and if you aren’t living here, it’s difficult to grasp how visceral an issue this is. You’re either on one side or the other, and it’s divisive. For years, I sensed this issue rising from the dirt, but I was still shocked by the severity of the law and the consequences outlined to those who would need to make those difficult choices. I wrote a poem for AL.com to communicate how passionate I felt about this issue. It makes me feel that the pendulum has swung back to 1972, which is dangerous.

I’m from here, and I don’t mind opposing views, but what is disturbing to me about that law specifically is that just because the consequences are harsh, that doesn’t stop the 14, 15, 16-year-old pregnant girl from seeking options that are so much more dangerous than what we can safely provide. And I fear that those girls are being sent into the backwoods again where female death is not uncommon, especially in my community. This book is written for young adults and bound to create conversation with girls and their parents — not only about sex and teenage pregnancy but also about choice and self-expression. Women haven’t always been encouraged to pursue creative careers. As a novelist, what would you say to girls who want to write but don’t feel supported or confident to explore that path?

I say ignore the negative self-talk or naysayers. It’s often suggested to women to consider “stable” professions where the schedules are flexible so that you can be a mother. I don’t think boys are getting that same advice. Even now, as a published author who is working on her third novel, I get asked what my “real” job is. There’s nothing wrong with having a career in a non-creative field, but if you are unhappy and pining for something else, that’s what you should be pursuing.

I was so fortunate to have a mother who truly celebrated and fostered my creativity from a young age. She is right up there with Maya Angelou as one of my top inspirations. I remember her letting me draw and color on the walls as a child instead of reprimanding me, and we rented! She definitely never got her deposit back! When I was afraid of flunking out of Homewood High School, I broke down. I knew I was smart but school didn’t click for me the way it did for my peers. I wondered what was wrong with me. My mother told me, “I don’t care what they say. You have a gift. You are God’s gift.” She said I was brilliant and didn’t need to fit the same mold in order to be brilliant and engaging and successful.

I realize not everyone has that cheerleader, but there are communities to be found and joined where writers can meet — in person and through social media. You can take classes at UAB, you can attend meet-ups for writers and join forums. That’s how I met my publisher, and that’s how I’ve made my way.