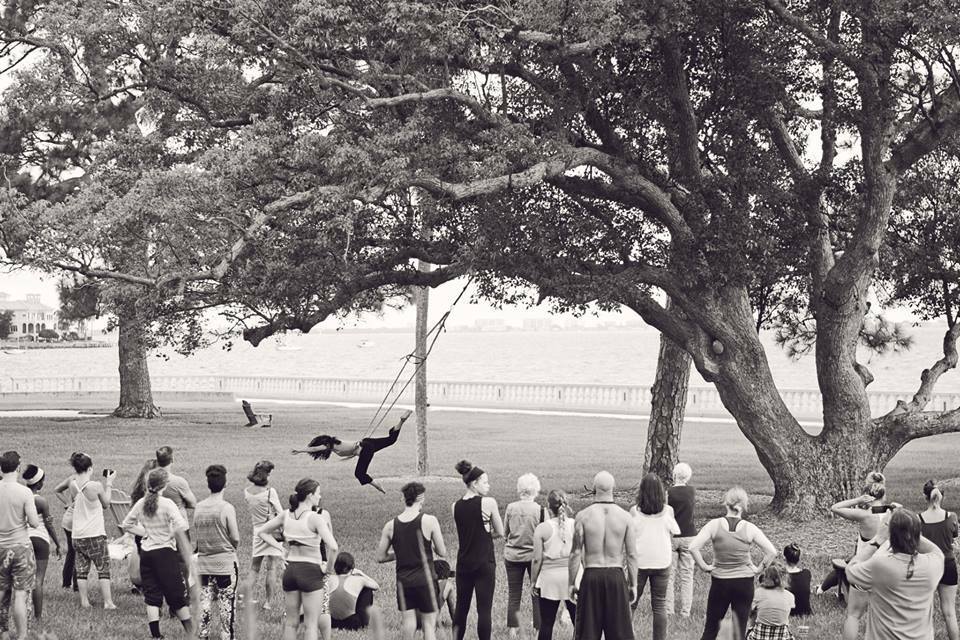 “I think we influence and impact other artists to design and build similar programs that use the arts to teach and illuminate academic concepts, and I hope this trend continues as the importance of STEAM is realized.”

Rachael Inman’s love for dance is evident in her wide-ranging background that includes modern dance, musical theatre, ballet, aerial explorations, and traditional Middle Eastern dance. Building on her many years of experience as a dancer, choreographer, and teacher, she joined The Dance Foundation as Artistic Director in 2016 and now serves as a passionate advocate for the art form in the Birmingham community.

You have danced, taught, and choreographed throughout the Southeast over the course of your career. What led you to take on the role of Artistic Director for The Dance Foundation?

Although I have lived in other places and traveled a good bit, Birmingham is my hometown. I grew up hearing about the mission and vision of the organization and was intrigued. After co-founding Fuziόn Dance Artists, a modern dance company in Sarasota, FL, I began to see how important it was to expose and engage audiences to concert dance forms versus more entertainment forms seen in commercials and on television. I found it was just as important as training young dancers to embody strong technique because if we didn’t develop audiences to see dance, we could make all the work we wanted as post-modern choreographers, but audiences would struggle to relate. As I got to know the organization, I became more and more impressed with the breadth and width of its vision and work in our community.

After graduate school, I moved back to Birmingham and began working with the “Math in Motion” touring company for a short while through the organization. After my most recent move back to Birmingham after dancing and teaching at Belhaven University, I reconnected with dance artist and friend Mary Foshee. She was on TDF faculty and we began making dance works together. I wanted to be a part of an organization that not only shared my common values in regards to diversity and inclusion but was also a place free to share my artistic passion and point of view.

What initially drew you to dance? How have your particular areas of interest and sources of inspiration evolved over the years?

I can’t remember a time when I didn’t love dancing. My mom said I began dancing in utero and never stopped. She put me in dance classes at 2 ½ years old. My strongest childhood memories of dancing were prompted by music. Whether we were riding in the car or dancing around the record player in our living room, I vividly recall specific music pieces. My dad introduced me to classical music, and while listening I began envisioning bodies moving like I was a maestro orchestrating them. Growing up in a Lebanese family attending parties and festivals where dance and music were intricately woven, I was strongly influenced by Middle Eastern sounds and was progressively drawn to the complexities and depth of Eastern modes and rhythms.

In my early 20’s I attended a Cirque du Soleil production for the first time and became enthralled with aerial dance. As I entered my graduate studies, I focused my research on the history and development of aerial dance. I came to realize my fascination with flight was not uncommon, and for centuries dancers and mankind, in general, have been inspired by visions of flight and weightlessness.

In the fifteen years or so since I have become more interested in exploring site-specific dance works as well as working with artists of varying disciplines. This eclectic mix of combined interests has led me to perform in many outdoor venues but also in cafés, galleries, exhibits, in an old dilapidated movie theatre, old churches, in the Birmingham Museum of Art’s fountains, throughout the Catalunya region of Spain, in and around a baby grand piano, in a ghetto in Barcelona down a staircase, on a boat in the Aegean Sea and next month, in the waters of Birmingham’s Shades Creek!

How do you envision The Dance Foundation impacting Birmingham’s arts landscape in the coming years?

For years, The Dance Foundation has impacted the arts landscape by initially providing classes that no one else was offering — classes for very young children, children with special needs, and children with socio-economic set-backs. We still offer these options and also provide artists of varying music, dance, and theatre genres a place to call home. I envision more engagement with and encouragement of independent artists who are looking for space to make work, explore their craft, and collaborate with others. I see supporting our local artists better and assisting our community to understand the more comprehensive face of dance.

TDF has been working in Birmingham area schools for over 30 years now. We have had programs that teach math and science, and most recently we have developed classroom programming entitled “Dancing with Words.” It is academic support designed to use dance to assist classroom teachers with language arts concepts. I think we influence and impact other artists to design and build similar programs that use the arts to teach and illuminate academic concepts, and I hope this trend continues as the importance of STEAM is realized.

What appeals to you most about the dance community in Birmingham? What do you hope to see more of in the future?

Birmingham’s dance community has deep roots, and we have fewer differences than we tend to think. I have worked with many local dance entities and noticed as the years have passed we are all similarly driven by our passions to share dance. We have different lenses through which we choose to “present” and share our passions, but with our world so diverse, our dance should reflect that diversity. There is room in this city for ALL variations. I hope to see more opportunities to brainstorm, share ideas, and support one another. Artists have a lot to bring to the table and if we can’t share and support each other within our own industry first with professionals who understand, how will we be able to share with our audiences who aren’t as versed in dance?

On April 14th, you will be leading Alabama’s participation in the 2018 National Water Dance, a biennial event that organizes dance artists and educators across the country into a movement choir to bring awareness to critical issues surrounding our waterways. How did you initially connect with this initiative?

I initially connected with the organization when I was on faculty at Belhaven University. The community organizer and I had worked in the same circles when I worked in Florida for a season. Our national dance community is small, and we find we are only a few dancers (or instructors) removed from someone else! I am passionate about this project because it combines my love of the outdoors with movement — dancing under the sky, in the water, among the wildlife and landscape. I can’t think of anything I’d rather do!