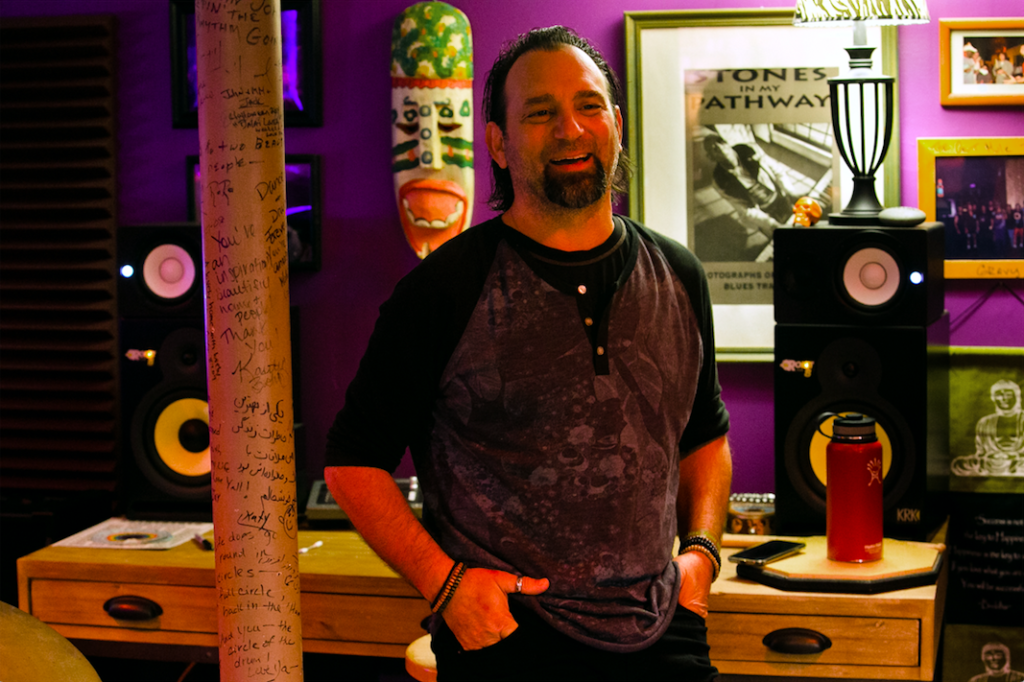 "Everyone wants a purpose. Sometimes, it takes a while to find it and sometimes you haven’t had the opportunity to develop it, but it’s there. I like to call it 'finding your personal rhythm.'" John Scalici has been marching to the beat of his own drum for most of his life, but for nearly two decades, he has devoted his life to helping others find their own personal rhythm. His company Get Rhythm combines life lessons with drumming techniques as a way to build connection between others and as an outlet for creative communication.

John, prior to founding Get Rhythm, you were a touring musician. What led you to move back home to Birmingham and shift gears into this form of music therapy?

I spent most of my time trying to get out of Birmingham. At that time, I didn’t feel like I could be a serious musician and be based here. I moved to Memphis and, for a time, “lived the dream” of playing with old cantankerous bluesmen in blues clubs. After a series of challenging life events — my band running its course and breaking up, a tragic family death, and a divorce — I found myself wanting to come back to Birmingham. I reached a point where I didn’t want to live my life on the road. I wanted to figure out a way to make a living doing something I loved but with purpose. Everyone wants a purpose. Sometimes, it takes a while to find it and sometimes you haven’t had the opportunity to develop it, but it’s there. I like to call it “finding your personal rhythm.” In 2001, I moved home and started an interactive drumming program.

What experience helped you find your own personal rhythm?

I was a frustrated teenager, not unlike a lot of other teens. My family life wasn’t always the most functional. My parents were both Sicilian, and there were certain expectations of what you should and shouldn’t do. Playing music was definitely “out of the box.” I think my family supported me in the way they knew how at the time, but I found myself through drumming. I could be by myself and express my feelings and energy in a way that was powerful for me. I’d play to records and imagine myself out of my present and into the future I wanted — to be in a band. In hindsight, there were so many emotional and physical benefits to the release that I found.

How have you seen those emotional and physical benefits play out in others? I had organized a drum circle at Children’s Hospital with some of the kids. One boy in particular who was in treatment for an advanced stage of cancer and weak from chemotherapy heard the drumming and came down with his mother to watch. He had to be brought down in a wagon. I gave him a mallet so that he could drum along, and the smile on his face and the tears in his mother’s eyes moved me in a way I’ll never forget. For just a little bit, he was able to remove himself from his present circumstances and be somewhere else doing something else, in that way I felt as a kid. That was a powerful moment for me, realizing the importance of what’s possible with a single beat.

Get Rhythm offers workshops for those who want to explore and learn how to play the drums, as well as fun and inclusive events like drum circles at venues around town. But a large part of your programming is in our education system. What does that element mean to you?

I go to the Shelby County Detention Center and work with the kids there. It really is something that is rewarding to me to connect with the young people there who often feel hopeless. It’s personal because, although I didn’t have the same circumstances growing up, I experienced a lot of the same feelings or thought processes. Drumming saved my life, and it continues to save my life every day by providing me an outlet. And I absolutely believe that it can do that for others. A lot of times, they might not feel like talking about their feelings or what’s going on at home or in their personal lives, but we drum about it. After that physical release, some are ready to open up. Some aren’t, but they communicated in a nonverbal way that lets them funnel their emotions into something creative and you can read that in their body language, faces, and energy after.

I don’t consider myself a music teacher. That’s a small part of what I do. I enjoy the enrichment part of going into schools. It becomes less about learning how to play the drums and more about listening to each other and working together to achieve something greater than what we can do by ourselves.

Ultimately, my philosophy is to motivate, empower, and inspire people to find their groove — not only with drums but in life. Drumming is just the vehicle.