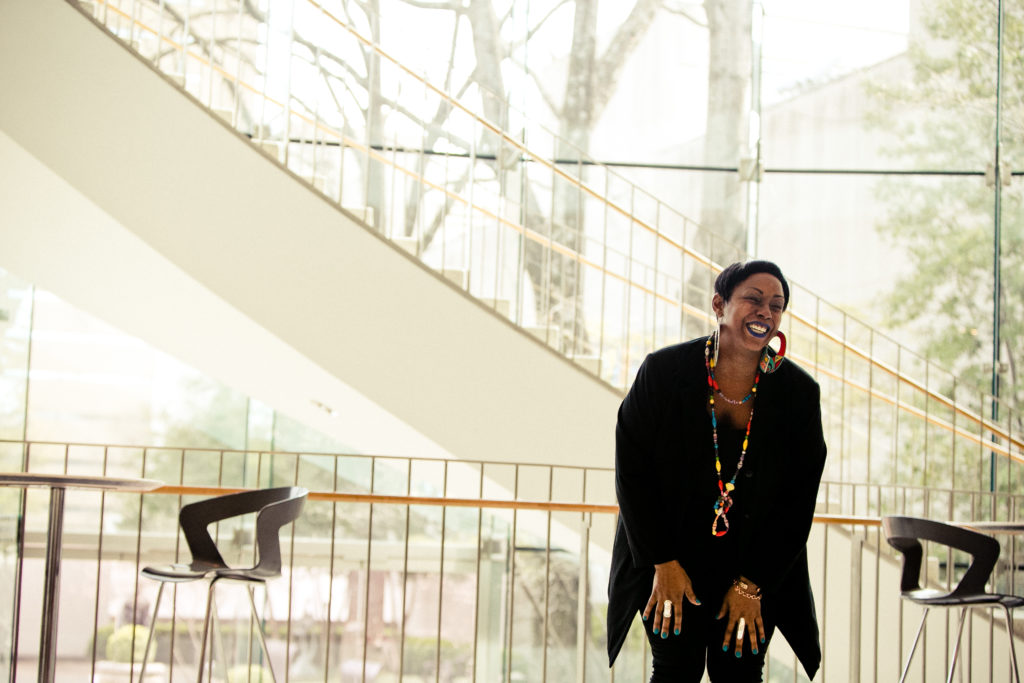 "My gift is to share my story and the stories of the people, particularly women, who I am creating jewelry for. I am approaching fifty, and I wear my stories proudly: the lessons, the pain, and the love... I want to make people who have felt beaten down at some point in their lives feel powerful and important. I create art for the human condition."

Albert Einstein said, “True art is characterized by an irresistible urge in the creative artist.” For Yogi Dada, that sentiment describes her journey to understanding and reaffirming her identity. The multi-talented creative is not only a poet and djembe drummer, but has also carved out a niche as a painter and jewelry designer with her eponymous line of wearable art. Sculpted from wood, painted, and embellished, Yogi’s mixed media pieces are colored by her own story and the stories of her collectors. Yogi, you moved to Birmingham from New York. What brought you here, and how do you feel that shaped who you are?

My family moved to Birmingham in 1989 because of my dad’s job. I was 17 years old, and that transition felt traumatic. I was shy and creative and had been so used to a diverse community where I had felt at ease with who I was. Birmingham has shifted some in recent years, but in the late eighties it was still so segregated and I didn’t feel embraced.

Looking back, that sense of isolation was what made my family so tightly knit. We did everything together because we felt we only had each other. It fueled my creativity too. I looked inward and found comfort in journaling and poetry. Birmingham was either going to make or break me, and that experience taught me what I was made of.

You were a Fine Arts major at UAB but ultimately ended up working in sales as an optician. What made you step away from pursuing a creative profession, and what lessons did you learn during that chapter of your career?After college, I really didn’t feel like I had found my footing in the creative community. I didn’t fit in, and I didn’t want to limit my expression to only painting or only writing or only performance art. I was burnt out, and so I followed an opportunity in sales. It served me well. I was able to grow out of my shyness and gain confidence in communicating and building relationships with others. I excelled, and I was the highest earning salesperson for our branch There were challenges though; I struggled moving up the corporate ladder, even though the numbers were there. At times, I felt like maybe it was the way I looked or dressed or just something about who I was that kept me from being promoted. Eventually, that frustration took a toll, and I felt discontent that this was my role in life.

What was the catalyst for you to return to a career in art?

In 2009, I lost my mother. I had been in a terrible car accident that severely injured my leg, resulting in multiple surgeries. I fell into a deep depression. My mother had always been my champion and pushed me to pursue my craft. Her voice became my inner voice, and I could hear her telling me to use my talent, but I had turned away from that part of myself for so long. A good friend invited me to a painting party she was hosting at her home, and I told her I’d attend but didn’t want to paint. When I got there, she had all these canvases, brushes, and paint. I painted for the first time in 17 years, and it was cathartic. Every emotion I had been suppressing came rushing out, and it reaffirmed who I was.

Since then, you have been performing as a musician and spoken word artist as well as graduating from the CO.STARTERS program, and launching a line of wearable art. What inspires and motivates you? I am inspired by artist Willard Wigan, a black artist from the UK. He’s dyslexic and never learned to read or write but creates intricate microscopic sculptures and has been extraordinarily successful. I read this article about him that asked, “What if you did what you were created to do?” That stuck with me. What if I just did what I was created to do? I thought about what it would be like if I had been born with scales and gills. Well, I’d live in the ocean. Fish don’t overthink where the next meal is going to come from; they don’t question their purpose or get caught up in the distortion of their own identity or value. They just swim. That has become my mantra: just swim. I know I am doing what I was created to do, and my spirituality guides that philosophy as well.

My gift is to share my story and the stories of the people, particularly women, who I am creating jewelry for. I am approaching fifty, and I wear my stories proudly: the lessons, the pain, and the love. I hear the stories of different women from all walks of life, and so many of them have felt the same things I’ve felt. I don’t want to be the black girl making earrings for black people. I want to be the artist creating beautiful things for all humans. I want to make people who have felt beaten down at some point in their lives feel powerful and important. I create art for the human condition.