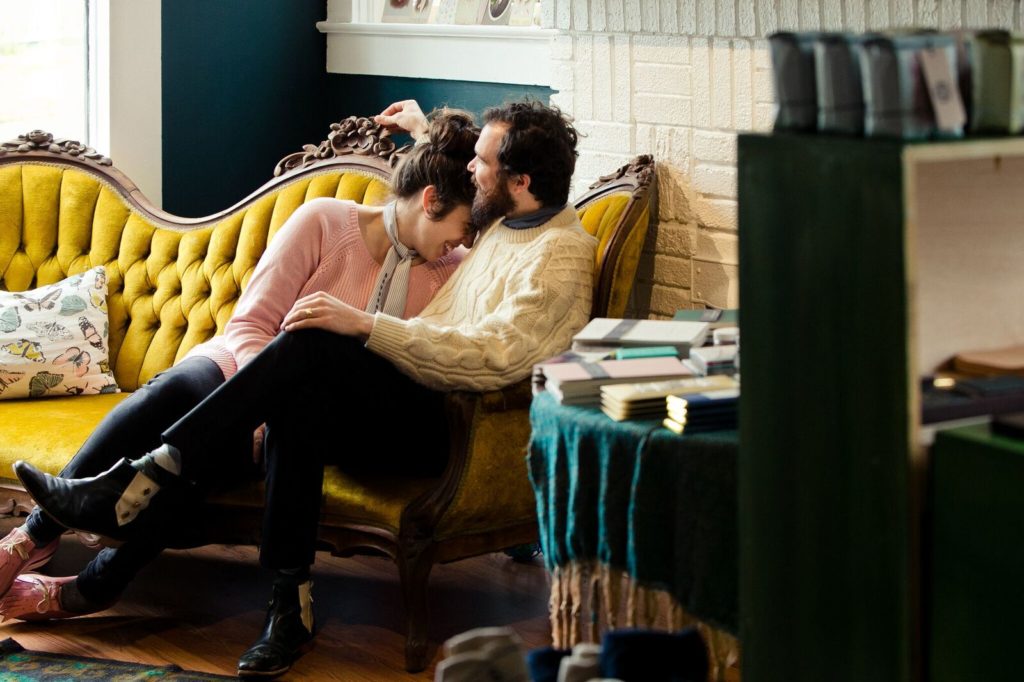 "There are moments when I’m in the back of the store working on a new line, and I can hear Kaitlin and Harrison in the front of the shop. Even though I can’t see them I know that we are there together. We share the same goals and the same dream."

Happy February! Love is in the air this month, and we are sharing stories of the creative partnerships of some of Birmingham’s favorite couples. Stay tuned as this month’s interviewees talk about how they inspire one another, the challenges and perks of working and living together, and the goals they hope to accomplish. We think you’ll fall for them as much as we have.

Love does not consist of gazing at each other,
but in looking outward together in the same direction. Within the jewel box that is Dreamers Supply Company, the quaint little shop tucked just off of Clairmont Avenue, there is a love story. Between ringing phones, jazz playing in the background, and the gurgles of their nearly one-year-old Harrison, owners Alan and Kaitlin Slattery are living their own dream. The illustrator and accessories designer share not only a business but also a common drive to pursue their goals and an affection for each other that is reflected in the romantic and whimsical boutique.

How did the two of you first meet?

Alan: At the time, I was pursuing ministry. I had moved to Alabama from Minnesota, and on my first day in my new role as a youth leader, Kaitlin passed by my doorway. She doubled back and asked if I was new.

Kaitlin: I thought he was cute! We were interested in each other but didn’t start dating right away. A year later, I was going to China and he was coming back from China. We met in the Hong Kong airport knowing that we wouldn’t have any contact for two months.

Alan: That was hard. As soon as we were able to contact each other again, all of Kaitlin’s friends started chiming in, and the rest is history. What inspired you to pursue creative careers and how did you navigate that together?Kaitlin: We were both just focused on earning a living at first. I had taken time off from pursuing my education and was working full time. Alan was still back and forth from Minnesota.We went to Savannah, Georgia for our anniversary and a bus with an ad for Savannah College of Art and Design drove past us. It said something like, “Be an accessories designer!” Alan had expressed his interest in leather-working to me, and I had been interested in illustrating and lettering. It was like a lightbulb went off.Alan: I had been experimenting with leather-working, learning all I could on YouTube and whatever I could read. I hadn’t considered that I could make a career out of it. I knew that a future in ministry wasn’t really right for me. Kaitlin and I decided to make a leap of faith, and we both applied to SCAD.Kaitlin: We were so excited but also nervous. What if he got in and I didn’t? I wanted to be happy for him, but I was afraid that I wouldn’t also have the opportunity. I was so relieved when we were both accepted! We were a young married couple without any financial backing or family assistance. That became our new concern, but we were supported by advisors, professors, and mentors who embraced us.

Alan: We got full-time jobs at the university which counted towards four classes a year for each of us and helped pay for our living expenses. The administration took us seriously because they realized that we were invested in our future together. That was also when we began working side-by-side and realized how well we work together.

What brought you back to Birmingham after SCAD? Alan: Birmingham was initially just supposed to be a resting spot on our way to New York. We were both interviewing and looking for work up there. The busyness of New York was electric and exciting but nonstop and made us question our motivation and priorities.

Kaitlin: We considered what our lives would look like there. We would have to tailor our whole lifestyle around what mattered the most to us if we were going to make it there. Was it our careers? Was it our relationships? Our vision of what we wanted began to evolve, and Birmingham felt like the place where we could “have it all.”

Have you found that to be true?

Alan: Ultimately, yes. Since we opened the store, we have been so warmly received by our community. But, initially we hit a wall.

Kaitlin: I think we first came out of SCAD with a great sense of accomplishment; we are both first generation college graduates in our families. We worked so hard as full-time students and employees. We were confident in our creative abilities. Alan: We expected everyone to love us! Ha ha!

Kaitlin: I experienced so much rejection; I knocked on doors and made cold calls. It was my first time to experience unemployment. One day, I was in Woodlawn Cycle Cafe, our neighborhood coffee shop, feeling so discouraged and was offered a position right then and there. I was so grateful! I worked on building relationships and was able to network with so many innovative people through that opportunity.

But then you left Birmingham again! Kaitlin: Yes, SCAD let us know about an alumni pitch project that would allow us to participate in a residency in Lacoste, France. I was thankful for my opportunity at Cycle, but I knew that wasn’t what I wanted to do long term. I also found out that I was pregnant, and I didn’t feel that I could keep up my same schedule post-baby.Alan: Our residency in France was time we needed personally and professionally. We reconnected and felt reinvigorated with inspiration. We were able to have the space to really think about how we could build something of our own, and when we came back to Birmingham, we hit the ground running. What are you most proud of since opening the store, and what do you hope to accomplish moving forward? Kaitlin: I love that we have the opportunity to foster emerging illustrators and makers and provide a home for unique and beautiful items that you don’t see everywhere else. I think that we work hard to understand the psychology of our customers and approach our inventory, marketing, and business philosophy with thoughtfulness.

I want to develop and publish my own illustrations and work towards Alan being in the shop with me full-time. He works a day job to help support us and designs his belts, handbags, and shoes in the evenings. I am so inspired by his creativity and the way he always figures out a way to make things work.

Alan: I am proud that we are building our future together. There are moments when I’m in the back of the store working on a new line, and I can hear Kaitlin and Harrison in the front of the shop. Even though I can’t see them I know that we are there together. We share the same goals and the same dream.