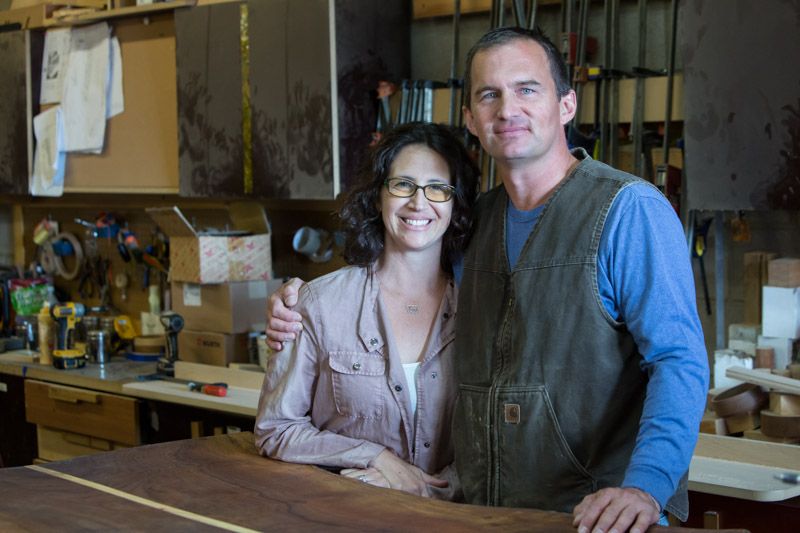 “Bring back shop class! I support being tech savvy, but not everyone has the constitution to sit in front of a computer. Open the textile mills back up! This is a state of workers. Making is work. Let’s work.”

At Alabama Sawyer, Cliff and Leigh Spencer create modern, sustainable goods from Birmingham’s fallen trees, diverting hundreds of logs from the landfill by transforming them into award-winning furniture and products for homes and businesses. Cliff worked as a set designer and master craftsman in New York, Aspen, and Los Angeles for more than twenty years before returning to his hometown. Leigh, a California-born graphic designer, guides the daily operations of the business and collaborates with Cliff on design.

Your business and your family relocated to Birmingham in 2016 after running a very successful custom woodshop in Los Angeles for twelve years. What inspired this decision?

Cliff is from Birmingham. When we met in 2001, he was actually considering moving back, but he met me and I was from LA. I have to admit that, at the time, I would not have said “Let’s move to Birmingham.” After fifteen extra years in LA, Cliff was missing being close to his family. More and more over time, when we visited Birmingham, we found new things we loved and reasons to make our trips longer. Cliff came to speak at Design Week Birmingham in 2014 and pitched the concept of the milling business Alasaw, saying “Birmingham is perfect for this concept. Alabama has the second largest urban forest, it’s easy to get around, there’s an interior design savvy community. Someone here should do this.” A few folks came out of the crowd and said, “Will YOU come here and do this?”

So Cliff started traveling back and forth in 2015, which gave him the opportunity to spend more time with his family. The idea had legs, but required full-time engagement to make it work. Both of our kids were about to switch schools, into kindergarten and middle school. I said,” You know, you spent fifteen years with my family in LA. You get 15 years in Birmingham, and then we can figure it out.” It would be an adventure. I do love LA, but I was up for less traffic and maybe even more football and fried chicken.

How did the move allow you to grow from a business perspective? How has it evolved from a creative perspective?

Focusing on it full-time was a necessity. Custom work is so intense. Every job and customer is different and has a lot of moving parts. There was no way we could run two different businesses from two cities — at least how we did it — very hands-on. It wasn’t until we were in Birmingham that we really got started figuring out how the business worked. From afar, it was an idea. Now that we have been here for almost a year and half, we have some good traction running the business. There may have been an idea that we would get to Birmingham and boom, be off and running, but really we had just cut and dried a lot of wood. Something that we needed to do. Making wood takes time.

Creatively, we were immediately immersed in an invigorating environment at MakeBHM. It increased our learning curve in getting to know the creative community and the resources of the city, though we still have a lot to discover. If we had jumped into some industrial space on the outskirts of town, I think we would have been lonely and uninspired. MakeBHM has great energy and different people working on creative businesses. You can bounce ideas off of people and collaborate.

Birmingham has a long history of steel and a great metal working community. That has been integrated into our designs. Just like the urban timber, we have our eyes on other local resources to extend our design language.

What have some of your favorite projects been over the years? Do you have any particular local favorites?

One of our first “tree concierge” projects was for the “Wing House.” The architect, David Hertz, is a harbinger in sustainable architecture and creative re-use. He used a decommissioned 747 to build a house overlooking the Santa Monica Mountains in Malibu. The site was Tony Duquette’s former property that had been destroyed in a fire. Some fencing and sub-structures remained. The owner, clearly daring and creative, had collected salvaged trees of various species on the property. We made her multiple benches and tables and a fantastic bed. When you hear “house made of an airplane,” you could get any number of images in your head. The house is gorgeous. Truly. A local favorite so far has to be the Birmingham Zoo. Who doesn’t like the Zoo? We made some natural play elements for Henley Park, the new event area.

Your Noaway Counter Top Compost Bin has been particularly popular, garnering mentions in everything from the LA Times and The Wall Street Journal to Food 52 and Goop. What do you think makes this product so appealing to so many people?

I mean, who knew, right? I think it has been successful because its origin was authentic. My mom was using one of those plastic salad boxes for her cuttings. Cliff thought the kitchen was too nice to be using something so disposable as an everyday tool, so he made her the first one, out of reclaimed oak. Now, many cities are requiring composting. We as a population are more interested in gardening and knowing where our food is coming from. As the name of the product says, there is “No away.” Collecting your cutting is about as easy as recycling, so it’s way to do your part without a ton of effort. It’s just a new habit. Buying a new habit seems like a good deal.

In addition to the tremendous benefits provided by MakeBHM, what appeals to you about Birmingham’s maker community? What do you hope to see more of as it continues to grow?

Moving from a metro area of 17 million to 1 million, I have found the maker community, the business community, and Birmingham in general just so friendly! Conversations aren’t as transactional. Folks give directions or let you in their lane on the highway without hesitation. Not that people aren’t busy. I feel like more people I meet have a side project or business or passion project or do regular volunteer work.

As for a change I hope to see, I think training, encouraging, and attracting makers and manufacturing should get as much solicitation as tech. Local makers use local resources and make them more valuable. Let’s send Alabama goods out at their highest value instead of as raw materials.

Bring back shop class! I support being tech savvy, but not everyone has the constitution to sit in front of a computer. Open the textile mills back up! This is a state of workers. Making is work. Let’s work.